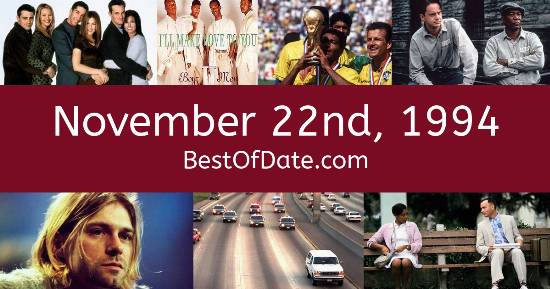 These songs were on top of the music charts in the United States and the United Kingdom on November 22nd, 1994.

The top "Box Office" movie on this date was the film "Star Trek: Generations".

The date is November 22nd, 1994, and it's a Tuesday. Anyone born today will have the star sign Sagittarius. In America, Thanksgiven Day of 1994 is just around the corner.

Bill Clinton is currently the President of the United States, and the movie Star Trek: Generations is at the top of the Box Office. In the United Kingdom, John Major is the current Prime Minister. Meanwhile, in technology news, a relatively new storage format called the CD is beginning to outpace the regular cassette tape in music sales. The disc-based format gives listeners the ability to skip between songs instead of having to manually rewind and forward.

It's 1994, so radio stations are being dominated by the likes of All-4-One, Boyz II Men, R. Kelly, Céline Dion, Bruce Springsteen, Bryan Adams, Meat Loaf, Bon Jovi, Wet Wet Wet, Rednex and Mariah Carey. In Europe, a war is continuing to rage on in Bosnia and Herzegovina. In music news, American girl group TLC have just released their new album "CrazySexyCool". The albums contains songs such as "Creep" and "Waterfalls".

Christmas films such as "The Santa Clause" and "Miracle on 34th Street" are currently being shown in movie theaters. In Ireland, Fianna Fáil leader Albert Reynolds has resigned from his position. His resignation comes after the Labour Party's decision to withdraw from government. If you were to travel back to this day, notable figures such as Eazy E, Selena, Bob Ross and Jerry Garcia would all be still alive.

On TV, people are watching popular shows such as "Last of the Summer Wine", "Murder, She Wrote", "Star Trek: Deep Space Nine" and "Frasier". Meanwhile, gamers are playing titles such as "Myst", "Sonic the Hedgehog 3", "Super Street Fighter II" and "Earthworm Jim". Children and teenagers are currently watching television shows such as "The Simpsons", "The Adventures of Pete & Pete", "Taz-Mania" and "X-Men: The Animated Series".

Popular toys at the moment include the likes of Pogo ball / Lolo ball, Sylvanian Families, Jenga and Pogs / Milkcaps.

These are trending news stories and fads that were prevalent at this time. These are topics that would have been in the media on November 22nd, 1994.

Check out our personality summary for people who were born on November 22nd, 1994.

Television shows that people were watching in November, 1994.

Popular video games that people were playing in November of 1994.

If you are looking for some childhood nostalgia, then you should check out November 22nd, 2000 instead.

Model.
Born on November 22nd, 1996
She was born exactly 2 years after this date.

Bill Clinton was the President of the United States on November 22nd, 1994.

Enter your date of birth below to find out how old you were on November 22nd, 1994.
This information is not transmitted to our server.

Here are some fun statistics about November 22nd, 1994.