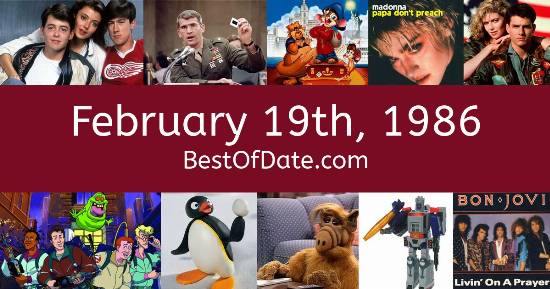 Songs that were on top of the music singles charts in the USA and the United Kingdom on February 19th, 1986.

The date is February 19th, 1986 and it's a Wednesday. Anyone born today will have the star sign Pisces. Valentine's Day of 1986 has just passed.

On TV, people are watching popular shows such as "Columbo.", "Knight Rider", "She-Ra: Princess of Power" and "MacGyver". Meanwhile, gamers are playing titles such as "Missile Command", "Donkey Kong", "Back to the Future" and "Ultima IV: Quest of the Avatar". Children and teenagers are currently watching television shows such as "Diff'rent Strokes", "Inspector Gadget", "Thomas the Tank Engine" and "ThunderCats".

Popular toys at the moment include the likes of the Easy-Bake Oven, Lite-Brite, Water Ring Toss and Big wheel (tricycle).

Ronald Reagan was the President of the United States on February 19th, 1986.

Margaret Thatcher was the Prime Minister of the United Kingdom on February 19th, 1986.

Enter your date of birth below to find out how old you were on February 19th, 1986.

Here are some fun statistics about February 19th, 1986.

Leave a comment and tell everyone why February 19th, 1986 is important to you.