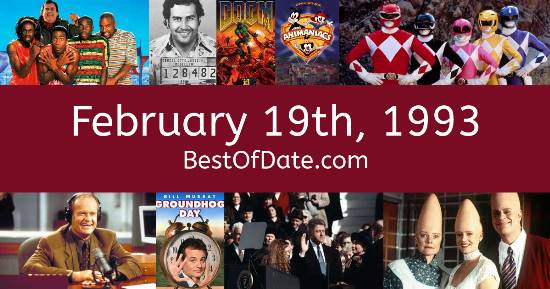 Songs that were on top of the music singles charts in the USA and the United Kingdom on February 19th, 1993.

The date is February 19th, 1993 and it's a Friday. Anyone born today will have the star sign Pisces. Currently, people have "that Friday feeling" and are looking forward to the weekend.

Valentine's Day of 1993 has just passed. In America, the song I Will Always Love You by Whitney Houston is on top of the singles charts. Over in the UK, No Limit by No Unlimited is the number one hit song.

Bill Clinton is currently the President of the United States and the movie Groundhog Day is at the top of the Box Office. In the United Kingdom, John Major is the current Prime Minister. A civil war is currently taking place in the African country of Rwanda.

A playing discs game called "Pogs" is currently spreading in popularity throughout the world. It's 1993, so radio stations are being dominated by the likes of Meat Loaf, UB40, Snow, Haddaway, Whitney Houston, Take That, Janet Jackson and Mariah Carey. A new film called Groundhog Day, starring Bill Murray, has just been released in movie theaters.

Former English footballer Bobby Moore has recently announced to the media that he is suffering from bowel and liver cancer. People are currently shocked by the news that missing 2-year-old James Bulger has been found murdered in Merseyside, England. On TV, people are watching popular shows such as "Teenage Mutant Ninja Turtles", "Saved by the Bell", "One Foot in the Grave" and "Dinosaurs".

Meanwhile, gamers are playing titles such as "Duck Hunt", "Wolfenstein 3D", "Super Mario Kart" and "Mortal Kombat". Children and teenagers are currently watching television shows such as "Married... with Children", "Clarissa Explains It All", "Dinosaurs" and "The Ren & Stimpy Show". Popular toys at the moment include the likes of Polly Pocket, G.I. Joe (figures), Super Soaker (water gun) and Mighty Max.

Bill Clinton was the President of the United States on February 19th, 1993.

John Major was the Prime Minister of the United Kingdom on February 19th, 1993.

Enter your date of birth below to find out how old you were on February 19th, 1993.

Here are some fun statistics about February 19th, 1993.