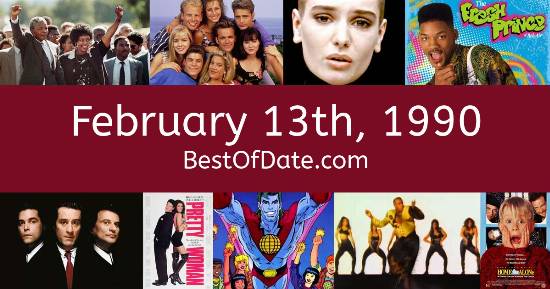 These songs were on top of the music charts in the United States and the United Kingdom on February 13th, 1990.

The movie "Hard to Kill" was at the top of the Box Office on this day.

The date is February 13th, 1990, and it's a Tuesday. Anyone born today will have the star sign Aquarius. Valentine's Day is just around the corner.

In America, the song Opposites Attract by Paula Abdul is on top of the singles charts. Over in the UK, Nothing Compares 2 U by Sinead O'Connor is the number one hit song. George W. Bush Snr. is currently the President of the United States, and the movie Hard to Kill is at the top of the Box Office.

A toy called "Polly Pocket" has become the latest craze. It's 1990, so the airwaves are being dominated by music artists such as Sinéad O'Connor, Paula Abdul, Janet Jackson, Vanilla Ice, Mariah Carey, Stevie B, Madonna and MC Hammer. Actor Billy Idol has just been involved in a serious motorcycle accident.

The Communist Party of the Soviet Union has agreed to give up its monopoly on power. Footage of South African activist Nelson Mandela being released from prison after 27 years in captivity is being broadcast around the world. In boxing, Buster Douglas has just pulled off a shock win over the undefeated "Iron Mike" Tyson.

In Europe, an agreement has just been reached to reunify Germany as one country. If you were to travel back to this day, notable figures such as Sammy Davis, Jr, Stevie Ray Vaughan, Roald Dahl and John Bardeen would all be still alive. On TV, people are watching popular shows such as "Columbo", "Only Fools and Horses", "Star Trek: The Next Generation" and "Family Matters".

Meanwhile, gamers are playing titles such as "Duck Hunt", "SimCity", "Super Mario Land" and "World Cup Italia '90". Kids and teenagers are watching TV shows such as "Danger Mouse", "Alvin and the Chipmunks", "Muppet Babies" and "21 Jump Street". Popular toys at the moment include the likes of Mr Frosty, Popples, Jenga and the Sega Genesis / Mega Drive.

These are trending news stories and fads that were prevalent at this time. These are topics that would have been in the media on February 13th, 1990.

News stories, pop culture trends, and other events that happened around February 13th, 1990.

Check out our personality summary for people who were born on February 13th, 1990.

If you are looking for some childhood nostalgia, then you should check out February 13th, 1996, instead.

Celebrities, historical figures, and other notable people who were born on February 13th.

George W. Bush Snr. was the President of the United States on February 13th, 1990.

Find out what your age was on February 13th, 1990, by entering your DOB below.
This information is not saved on our server.

Here are some fun statistics about February 13th, 1990.