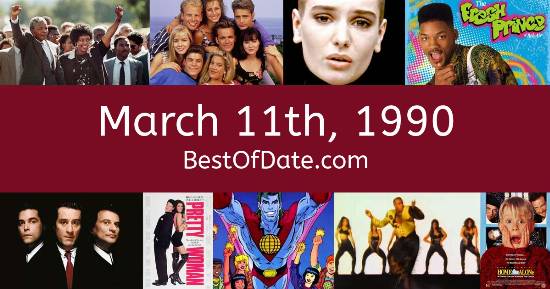 Songs that were on top of the music singles charts in the USA and the United Kingdom on March 11th, 1990:

The date is March 11th, 1990 and it's a Sunday. Anyone born today will have the star sign Pisces. Currently, people are enjoying their weekend.

George W. Bush Snr. is currently the President of the United States and the movie Driving Miss Daisy is at the top of the Box Office. In the United Kingdom, Margaret Thatcher is the current Prime Minister. In fashion, many of the trends from the late 80s are still popular. Colored tights, denim overalls, leotards, flannel shirts and shoulder pads are all fashionable at the moment.

It's 1990, so the airwaves are being dominated by music artists such as Sinéad O'Connor, Paula Abdul, Janet Jackson, Vanilla Ice, Mariah Carey, Stevie B, Madonna and MC Hammer. Tributes are pouring in for American college basketball player Hank Gathers, who recently died after he collapsed during a game. Gathers was 23 years of age and had a heart condition. An outbreak of violent tornadoes is currently affecting central parts of the United States.

The Soviet Union is continuing to unravel, as Lithuania declares its independence from the USSR. On TV, people are watching popular shows such as "Knots Landing", "The Golden Girls", "Teenage Mutant Ninja Turtles" and "Saved by the Bell". Meanwhile, gamers are playing titles such as "Duck Hunt", "Super Mario Land", "Castlevania III: Dracula's Curse" and "Phantasy Star II".

Children and teenagers are currently watching television shows such as "Muppet Babies", "Pingu", "The Real Ghostbusters" and "Count Duckula". If you're a kid or a teenager, then you're probably playing with toys such as "Water Ring Toss", "Sylvanian Families", "Popples" and "Jenga".

Who was the Prime Minister of the United Kingdom on March 11th, 1990?

Enter your date of birth below to find out how old you were on March 11th, 1990.

Looking for some nostalgia? Here are some Youtube videos relating to March 11th, 1990. Please note that videos are automatically selected by Youtube and that results may vary! Click on the "Load Next Video" button to view the next video in the search playlist. In many cases, you'll find episodes of old TV shows, documentaries, music videos and soap dramas.