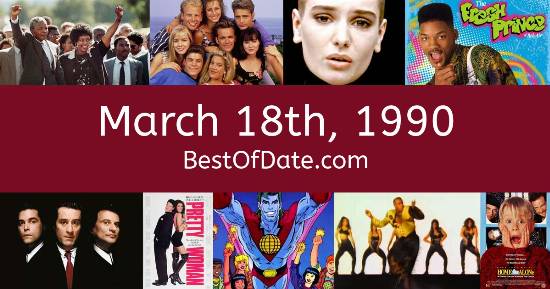 Songs that were on top of the music singles charts in the USA and the United Kingdom on March 18th, 1990:

The date is March 18th, 1990 and it's a Sunday. Anyone born today will have the star sign Pisces. Currently, people are enjoying their weekend.

Spring has arrived and the days have become longer. St. Patrick's Day of 1990 has recently come and gone. In America, the song Escapade by Janet Jackson is on top of the singles charts.

Over in the UK, Dub Be Good To Me by Beats International is the number one hit song. George W. Bush Snr. is currently the President of the United States and the movie Hunt for Red October is at the top of the Box Office. In the United Kingdom, Margaret Thatcher is the current Prime Minister.

In fashion, many of the trends from the late 80s are still popular. Colored tights, denim overalls, leotards, flannel shirts and shoulder pads are all fashionable at the moment. It's 1990, so the airwaves are being dominated by music artists such as Sinéad O'Connor, Paula Abdul, Janet Jackson, Vanilla Ice, Mariah Carey, Stevie B, Madonna and MC Hammer. British journalist Farzad Bazoft has been hanged to death in Iraq for spying for Israel, despite any conclusive evidence.

If you're a kid or a teenager, then you're probably playing with toys such as "My Little Pony (figures)", "Transformers", "Popples" and "Yo-yo".

Who was the Prime Minister of the United Kingdom on March 18th, 1990?

Enter your date of birth below to find out how old you were on March 18th, 1990.

Looking for some nostalgia? Here are some Youtube videos relating to March 18th, 1990. Please note that videos are automatically selected by Youtube and that results may vary! Click on the "Load Next Video" button to view the next video in the search playlist. In many cases, you'll find episodes of old TV shows, documentaries, music videos and soap dramas.