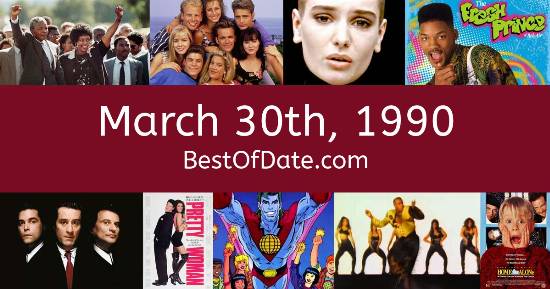 Songs that were on top of the music singles charts in the USA and the United Kingdom on March 30th, 1990:

The date is March 30th, 1990 and it's a Friday. Anyone born today will have the star sign Aries. Currently, people have "that Friday feeling" and are looking forward to the weekend.

Spring has arrived and the days have become longer. In America, the song Black Velvet by Alannah Myles is on top of the singles charts. Over in the UK, The Power by Snap is the number one hit song.

It's 1990, so the airwaves are being dominated by music artists such as Sinéad O'Connor, Paula Abdul, Janet Jackson, Vanilla Ice, Mariah Carey, Stevie B, Madonna and MC Hammer. Bob Hawke's Labor Government has just been re-elected following the 1990 Australian federal election. In the Bronx borough of New York City, 87 people have died following an arson attack on an unlicensed social club called Happy Land. Most of the dead are young Hondurans who were celebrating Carnival.

On TV, people are watching popular shows such as "Only Fools and Horses", "Star Trek: The Next Generation", "Quantum Leap" and "Family Matters". Meanwhile, gamers are playing titles such as "Duck Hunt", "Herzog Zwei", "Batman: The Video Game" and "World Cup Italia '90". Kids and teenagers are watching TV shows such as "Growing Pains", "Hey Dude", "Saved by the Bell" and "The Simpsons".

Celebrities, historical figures and noteable people who were born on the 30th of March:

Who was the Prime Minister of the United Kingdom on March 30th, 1990?

Enter your date of birth below to find out how old you were on March 30th, 1990.

Looking for some nostalgia? Here are some Youtube videos relating to March 30th, 1990. Please note that videos are automatically selected by Youtube and that results may vary! Click on the "Load Next Video" button to view the next video in the search playlist. In many cases, you'll find episodes of old TV shows, documentaries, music videos and soap dramas.