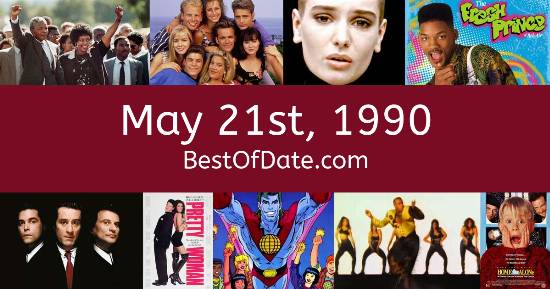 These songs were on top of the music charts in the United States and the United Kingdom on May 21st, 1990.

The top "Box Office" movie on this date was the film "Bird on a Wire".

The date is May 21st, 1990, and it's a Monday. Anyone born today will have the star sign Gemini. The summer of 1990 has finally arrived. The weather has warmed up and the evenings are brighter than usual.

In America, the song Vogue by Madonna is on top of the singles charts. Over in the UK, Killer by Adamski is the number one hit song. George W. Bush Snr. is currently the President of the United States, and the movie Bird on a Wire is at the top of the Box Office.

Jim Henson, who created "the Muppets", has passed away at the age of 53 from pneumonia. The World Health Organization has officially removed homosexuality from its list of diseases. Meanwhile, in soccer, Manchester United have won the FA Cup after defeating Crystal Palace 1-0 in a replay. The winning goal came from left-back Lee Martin. In Europe, the Soviet Union is continuing to fall apart. Romania, which was once a Soviet state, has just held its first parliamentary elections after the execution of Communist dictator Nicolae Ceaușescu last December.

The series finale of Newhart has just been aired on television and viewers are shocked that the entire sitcom was a dream that the main character was having. If you were to travel back to this day, notable figures such as Stevie Ray Vaughan, Roald Dahl, John Bardeen and Miles Davis would all be still alive. On TV, people are watching popular shows such as "'Allo 'Allo!", "Who's the Boss?", "Married... with Children" and "One Foot in the Grave".

Meanwhile, gamers are playing titles such as "Gain Ground", "Super Mario Land", "DuckTales" and "Golden Axe". Children and teenagers are currently watching television shows such as "The Care Bears", "Growing Pains", "DuckTales" and "Hey Dude". If you're a kid or a teenager, then you're probably playing with toys such as the Easy-Bake Oven, the Nintendo Entertainment System, the Sega Genesis / Mega Drive and Yo-yo.

These are trending news stories and fads that were prevalent at this time. These are topics that would have been in the media on May 21st, 1990.

News stories and other events that happened around May 21st, 1990.

Check out our personality summary for people who were born on May 21st, 1990.

If you are looking for some childhood nostalgia, then you should check out May 21st, 1996 instead.

Internet personality.
Born on May 21st, 1991
She was born exactly one year after this date.

Historical weather information for May 21st, 1990.

Margaret Thatcher was the Prime Minister of the United Kingdom on May 21st, 1990.

Find out what your age was on May 21st, 1990, by entering your DOB below.
This information is not saved on our server.