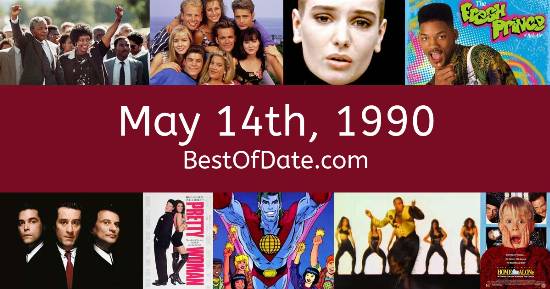 Songs that were on top of the music singles charts in the USA and the United Kingdom on May 14th, 1990.

The date is May 14th, 1990 and it's a Monday. Anyone born today will have the star sign Taurus. The summer of 1990 has finally arrived. The weather has warmed up and the evenings are brighter than usual.

In America, the song Vogue by Madonna is on top of the singles charts. Over in the UK, Killer by Adamski is the number one hit song. George W. Bush Snr. is currently the President of the United States and the movie Pretty Woman is at the top of the Box Office.

It's 1990, so the airwaves are being dominated by music artists such as Sinéad O'Connor, Paula Abdul, Janet Jackson, Vanilla Ice, Mariah Carey, Stevie B, Madonna and MC Hammer. If you were to travel back to this day, notable figures such as Sammy Davis, Jr, Stevie Ray Vaughan, Roald Dahl and John Bardeen would all be still alive. On TV, people are watching popular shows such as "Night Court", "The Cosby Show", "Star Trek: The Next Generation" and "In the Heat of the Night".

Meanwhile, gamers are playing titles such as "Duck Hunt", "Gain Ground", "Super Mario Land" and "Herzog Zwei". Kids and teenagers are watching TV shows such as "The Real Ghostbusters", "Adventures of the Little Koala", "Hey Dude" and "Beetlejuice". Popular toys at the moment include the likes of the Easy-Bake Oven, Transformers, the Game Boy and Yo-yo.

Notable events that occurred around May 14th, 1990.

If you are looking for some childhood nostalgia, then check out May 14th, 1996 instead.

Internet personality.
Born on May 14th, 1996
She was born exactly 6 years after this date.

Historical weather information for May 14th, 1990.

Margaret Thatcher was the Prime Minister of the United Kingdom on May 14th, 1990.