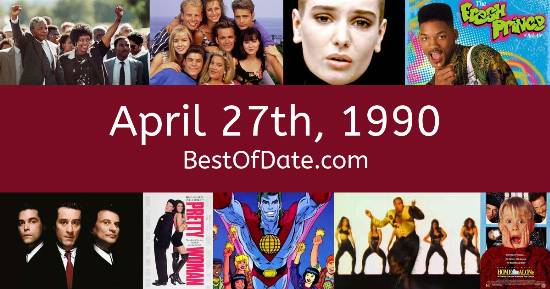 Songs that were on top of the music singles charts in the USA and the United Kingdom on April 27th, 1990:

The date is April 27th, 1990 and it's a Friday. Anyone born today will have the star sign Taurus. Currently, people have "that Friday feeling" and are looking forward to the weekend.

The summer of 1990 is drawing closer and temperatures have started to rise. In America, the song Nothing Compares 2 U by Sinead O'Connor is on top of the singles charts. Over in the UK, Vogue by Madonna is the number one hit song.

George W. Bush Snr. is currently the President of the United States and the movie Teenage Mutant Ninja Turtles is at the top of the Box Office. In the United Kingdom, Margaret Thatcher is the current Prime Minister. In fashion, many of the trends from the late 80s are still popular. Colored tights, denim overalls, leotards, flannel shirts and shoulder pads are all fashionable at the moment.

Lebanese kidnappers have released American business professor Robert Polhill after three years of holding him captive. The Hubble Space Telescope has just been launched into space. Meanwhile, in Europe, West Germany and East Germany have agreed to merge their economies. A new game called "Final Fantasy III" has just been released on the Nintendo Entertainment System.

On TV, people are watching popular shows such as "Columbo.", "Last of the Summer Wine", "21 Jump Street" and "Twin Peaks". Meanwhile, gamers are playing titles such as "Super Mario Land", "Castlevania III: Dracula's Curse", "Batman: The Video Game" and "Phantasy Star II". Children and teenagers are currently watching television shows such as "Danger Mouse", "Growing Pains", "Saved by the Bell" and "Nellie the Elephant".

Who was the Prime Minister of the United Kingdom on April 27th, 1990?

Enter your date of birth below to find out how old you were on April 27th, 1990.

Looking for some nostalgia? Here are some Youtube videos relating to April 27th, 1990. Please note that videos are automatically selected by Youtube and that results may vary! Click on the "Load Next Video" button to view the next video in the search playlist. In many cases, you'll find episodes of old TV shows, documentaries, music videos and soap dramas.