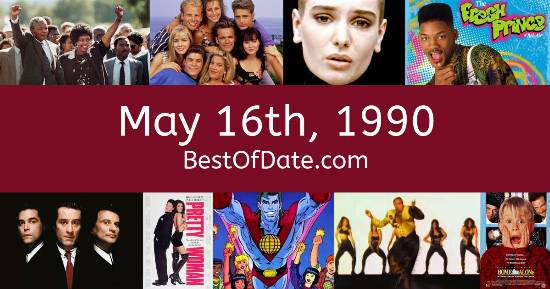 These songs were on top of the music charts in the United States and the United Kingdom on May 16th, 1990.

The date is May 16th, 1990, and it's a Wednesday. Anyone born today will have the star sign Taurus. The summer of 1990 has finally arrived. The weather has warmed up and the evenings are brighter than usual.

In America, the song Vogue by Madonna is on top of the singles charts. Over in the UK, Killer by Adamski is the number one hit song. George W. Bush Snr. is currently the President of the United States, and the movie Pretty Woman is at the top of the Box Office.

Jim Henson, who created "the Muppets", has passed away at the age of 53 from pneumonia. If you were to travel back to this day, notable figures such as Sammy Davis, Jr, Stevie Ray Vaughan, Roald Dahl and John Bardeen would all be still alive. On TV, people are watching popular shows such as "Columbo", "The Cosby Show", "Charles in Charge" and "Star Trek: The Next Generation".

Meanwhile, gamers are playing titles such as "Duck Hunt", "The Revenge of Shinobi", "Herzog Zwei" and "World Cup Italia '90". Children and teenagers are currently watching television shows such as "The Care Bears", "Married... with Children", "DuckTales" and "In Living Color". If you're a kid or a teenager, then you're probably playing with toys such as the Easy-Bake Oven, Cabbage Patch Kids, Polly Pocket and Lego Pirates.

These are trending news stories and fads that were prevalent at this time. These are topics that would have been in the media on May 16th, 1990.

Check out our personality summary for people who were born on May 16th, 1990.

If you are looking for some childhood nostalgia, then you should check out May 16th, 1996 instead.

Historical weather information for May 16th, 1990.

Margaret Thatcher was the Prime Minister of the United Kingdom on May 16th, 1990.

Enter your date of birth below to find out how old you were on May 16th, 1990.
This information is not transmitted to our server.