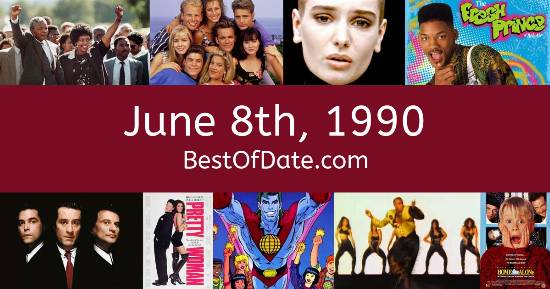 Songs that were on top of the music singles charts in the USA and the United Kingdom on June 8th, 1990.

The date is June 8th, 1990 and it's a Friday. Anyone born today will have the star sign Gemini. Currently, people have "that Friday feeling" and are looking forward to the weekend.

It's summer, so the temperatures are warmer and the evenings are longer than usual. In America, the song Hold On by Wilson Phillips is on top of the singles charts. Over in the UK, World In Motion by England / New Order is the number one hit song.

George W. Bush Snr. is currently the President of the United States and the movie Another 48 HRS. is at the top of the Box Office. In the United Kingdom, Margaret Thatcher is the current Prime Minister. Texting is not a thing yet. Instead, people are using landline phones and pagers. Furthermore, the vast majority of people still have no idea what "the Internet" is.

Meanwhile, the Soviet Union is continuing to dissolve. Czechoslovakia, which was under Communist rule until recently, has just held its first free parliamentary elections. If you were to travel back to this day, notable figures such as Stevie Ray Vaughan, Roald Dahl, John Bardeen and Miles Davis would all be still alive. On TV, people are watching popular shows such as "Who's the Boss?", "Married... with Children", "21 Jump Street" and "Star Trek: The Next Generation".

Meanwhile, gamers are playing titles such as "DuckTales", "Castlevania III: Dracula's Curse", "Batman: The Video Game" and "Phantasy Star II". Kids and teenagers are watching TV shows such as "21 Jump Street", "Adventures of the Little Koala", "DuckTales" and "Roseanne". Popular toys at the moment include the likes of Transformers, Boglins (hand puppets), the Ghostbusters Proton Pack and the Sega Genesis / Mega Drive.

If you are looking for some childhood nostalgia, then check out June 8th, 1996 instead.

George W. Bush Snr. was the President of the United States on June 8th, 1990.

Margaret Thatcher was the Prime Minister of the United Kingdom on June 8th, 1990.

Enter your date of birth below to find out how old you were on June 8th, 1990.

Here are some fun statistics about June 8th, 1990.