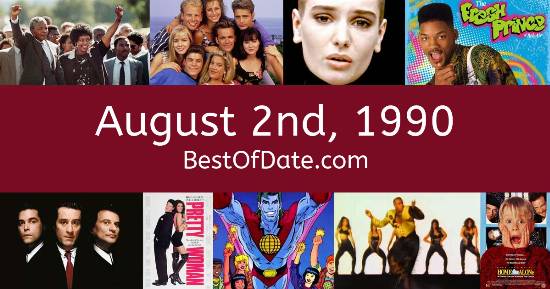 Songs that were on top of the music singles charts in the USA and the United Kingdom on August 2nd, 1990.

The movie "Presumed Innocent" was at the top of the box office on August 2nd, 1990.

The date is August 2nd, 1990 and it's a Thursday. Anyone born today will have the star sign Leo. It's summer, so the temperatures are warmer and the evenings are longer than usual.

In America, the song Vision Of Love by Mariah Carey is on top of the singles charts. Over in the UK, Turtle Power by Partners in Kryme is the number one hit song. George W. Bush Snr. is currently the President of the United States and the movie Presumed Innocent is at the top of the Box Office.

It's 1990, so the airwaves are being dominated by music artists such as Sinéad O'Connor, Paula Abdul, Janet Jackson, Vanilla Ice, Mariah Carey, Stevie B, Madonna and MC Hammer. British politician Ian Gow has just been assassinated by the IRA in East Sussex. In Europe, the Soviet Union is continuing to dissolve as Belarus declares its sovereignty. Meanwhile, Bulgaria has just elected its first non-Communist president in over 40 years.

In the Middle East, Iraqi forces have invaded the neighboring country of Kuwait. The invasion has received widespread condemnation from the international community and the UN Security Council is currently demanding that Saddam Hussein withdraw his forces from the country. If you were to travel back to this day, notable figures such as Stevie Ray Vaughan, Roald Dahl, John Bardeen and Miles Davis would all be still alive. On TV, people are watching popular shows such as "Last of the Summer Wine", "Only Fools and Horses", "Cheers" and "The Golden Girls".

Meanwhile, gamers are playing titles such as "RoboCop", "Super Mario Land", "DuckTales" and "Herzog Zwei". Kids and teenagers are watching TV shows such as "The Cosby Show", "The Real Ghostbusters", "Married... with Children" and "In Living Color". Popular toys at the moment include the likes of Mr Frosty, the Ghostbusters Proton Pack, Teenage Mutant Hero Turtles figures and Yo-yo.

If you are looking for some childhood nostalgia, then check out August 2nd, 1996 instead.

George W. Bush Snr. was the President of the United States on August 2nd, 1990.

Margaret Thatcher was the Prime Minister of the United Kingdom on August 2nd, 1990.

Enter your date of birth below to find out how old you were on August 2nd, 1990.

Here are some fun statistics about August 2nd, 1990.