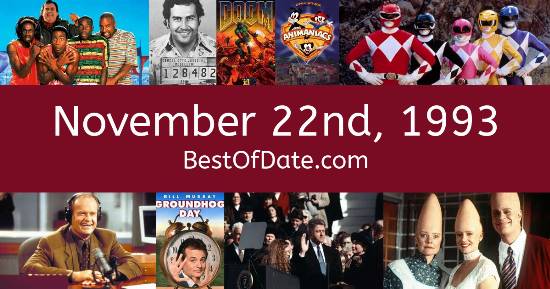 Songs that were on top of the music singles charts in the USA and the United Kingdom on November 22nd, 1993:

The date is November 22nd, 1993 and it's a Monday. Anyone born today will have the star sign Sagittarius. In America, Thanksgiven Day of 1993 is just around the corner.

It's November, so the evenings are getting darker and the days are getting colder. The song I'd Do Anything For Love by Meat Loaf is on top of the singles charts in both the USA and the United Kingdom. Bill Clinton is currently the President of the United States and the movie Addams Family Values is at the top of the Box Office.

A playing discs game called "Pogs" is currently spreading in popularity throughout the world. It's 1993, so radio stations are being dominated by the likes of Meat Loaf, UB40, Snow, Haddaway, Whitney Houston, Take That, Janet Jackson and Mariah Carey. On TV, people are watching popular shows such as "Last of the Summer Wine", "Home Improvement", "Melrose Place" and "Mad About You".

Meanwhile, gamers are playing titles such as "Desert Strike ", "FIFA International Soccer", "Syndicate" and "Disney's Aladdin". Kids and teenagers are watching TV shows such as "Thomas the Tank Engine", "Home Improvement", "X-Men: The Animated Series" and "Bill Nye the Science Guy". If you're a kid or a teenager, then you're probably playing with toys such as "Polly Pocket", "Yo-yo", "Littlest Pet Shop" and "Action Man".

Who was the Prime Minister of the United Kingdom on November 22nd, 1993?

Enter your date of birth below to find out how old you were on November 22nd, 1993.

Looking for some nostalgia? Here are some Youtube videos relating to November 22nd, 1993. Please note that videos are automatically selected by Youtube and that results may vary! Click on the "Load Next Video" button to view the next video in the search playlist. In many cases, you'll find episodes of old TV shows, documentaries, music videos and soap dramas.

Here are some fun statistics about November 22nd, 1993.