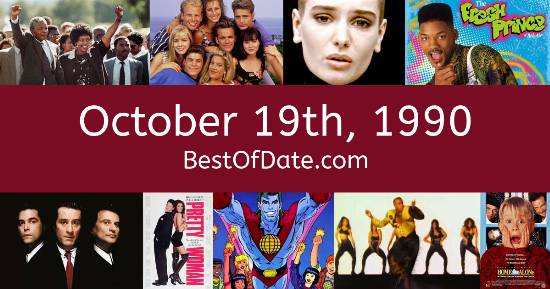 Songs that were on top of the music singles charts in the USA and the United Kingdom on October 19th, 1990:

The date is October 19th, 1990 and it's a Friday. Anyone born today will have the star sign Libra. Currently, people have "that Friday feeling" and are looking forward to the weekend.

The summer is long gone. Temperatures have started to become much cooler and the evenings are beginning to get darker. Fallen leaves have carpeted driveways, lawns, pathways and sidewalks and there's a fresh earthy scent in the ear. In America, the song I Don't Have The Heart by James Ingram is on top of the singles charts.

Over in the UK, Show Me Heaven by Maria McKee is the number one hit song. George W. Bush Snr. is currently the President of the United States and the movie Marked for Death is at the top of the Box Office. In the United Kingdom, Margaret Thatcher is the current Prime Minister.

A civil war has broken out in the African nation of Rwanda. In Europe, the Soviet Union is continuing to dissolve. A new teen drama called "Beverly Hills, 90210" has just made its television debut.

In celebrity news, actor Jeff Goldblum and Geena Davis have filed for divorce after just two years of marriage. On TV, people are watching popular shows such as "'Allo 'Allo!", "Who's the Boss?", "The Golden Girls" and "Star Trek: The Next Generation". Meanwhile, gamers are playing titles such as "Duck Hunt", "Batman: The Video Game", "Super Mario World" and "World Cup Italia '90".

Children and teenagers are currently watching television shows such as "Alvin and the Chipmunks", "Married... with Children", "Count Duckula" and "Rosie and Jim". If you're a kid or a teenager, then you're probably playing with toys such as "Easy-Bake Oven", "Water Ring Toss", "Sylvanian Families" and "Yo-yo".

Who was the Prime Minister of the United Kingdom on October 19th, 1990?

Enter your date of birth below to find out how old you were on October 19th, 1990.

Looking for some nostalgia? Here are some Youtube videos relating to October 19th, 1990. Please note that videos are automatically selected by Youtube and that results may vary! Click on the "Load Next Video" button to view the next video in the search playlist. In many cases, you'll find episodes of old TV shows, documentaries, music videos and soap dramas.

Here are some fun statistics about October 19th, 1990.