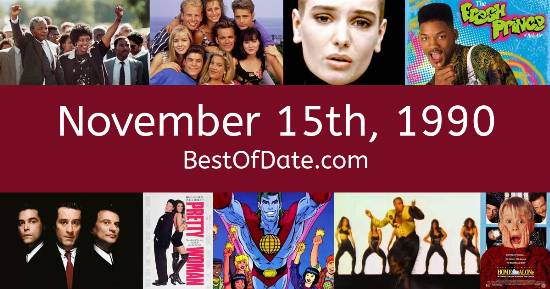 These songs were on top of the music charts in the United States and the United Kingdom on November 15th, 1990.

The date is November 15th, 1990, and it's a Thursday. Anyone born today will have the star sign Scorpio. It's November, so the evenings are getting darker and the days are getting colder.

In America, the song Love Takes Time by Mariah Carey is on top of the singles charts. Over in the UK, Unchained Melody by Righteous Brothers is the number one hit song. George W. Bush Snr. is currently the President of the United States, and the movie Child's Play 2 is at the top of the Box Office.

New Zealand is in shock following the news that a mass shooting in Aramoana has claimed the lives of 13 people. Music fans are shocked by news that R&B duo Milli Vanilli have been lip-syncing the entire time. If you were to travel back to this day, notable figures such as Roald Dahl, John Bardeen, Miles Davis and Freddie Mercury would all be still alive.

On TV, people are watching popular shows such as "Columbo", "Dallas", "Night Court" and "Family Matters". Meanwhile, gamers are playing titles such as "Super Mario Land", "The Revenge of Shinobi", "Super Mario World" and "Phantasy Star II". Children and teenagers are currently watching television shows such as "Alvin and the Chipmunks", "Pingu", "Adventures of the Little Koala" and "DuckTales".

If you're a kid or a teenager, then you're probably playing with toys such as Cabbage Patch Kids, Screwball Scramble, the Nintendo Entertainment System and Koosh Ball.

These are trending news stories and fads that were prevalent at this time. These are topics that would have been in the media on November 15th, 1990.

News stories and other events that happened around November 15th, 1990.

Check out our personality summary for people who were born on November 15th, 1990.

If you are looking for some childhood nostalgia, then you should check out November 15th, 1996 instead.

Soccer player.
Born on November 15th, 1993
He was born exactly 3 years after this date.

Rugby player.
Born on November 15th, 1996
He was born exactly 6 years after this date.

George W. Bush Snr. was the President of the United States on November 15th, 1990.

Margaret Thatcher was the Prime Minister of the United Kingdom on November 15th, 1990.

Find out what your age was on November 15th, 1990, by entering your DOB below.
This information is not saved on our server.

Here are some fun statistics about November 15th, 1990.