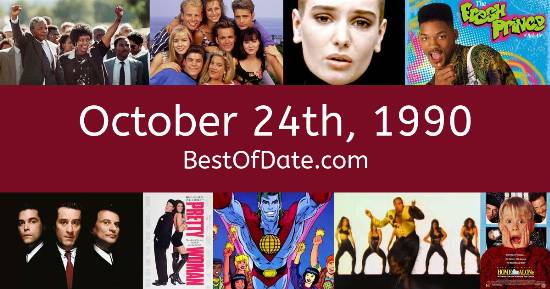 Songs that were on top of the music singles charts in the USA and the United Kingdom on October 24th, 1990.

The date is October 24th, 1990 and it's a Wednesday. Anyone born today will have the star sign Scorpio. The summer is long gone. Temperatures have started to become much cooler and the evenings are beginning to get darker.

Fallen leaves have carpeted driveways, lawns, pathways and sidewalks and there's a fresh earthy scent in the ear. Halloween of 1990 is quickly approaching and stores are selling costumes and decorations. In America, the song Black Cat by Janet Jackson is on top of the singles charts.

Over in the UK, A Little Time by Beautiful South is the number one hit song. George W. Bush Snr. is currently the President of the United States and the movie Marked for Death is at the top of the Box Office. In the United Kingdom, Margaret Thatcher is the current Prime Minister.

A civil war has broken out in the African nation of Rwanda. In Europe, the Soviet Union is continuing to dissolve. In baseball, the Cincinnati Reds have just won the 1990 World Series after defeating the Oakland Athletics in a four-game sweep.

On TV, people are watching popular shows such as "Columbo.", "In the Heat of the Night", "Family Matters" and "The Flash". Meanwhile, gamers are playing titles such as "The Revenge of Shinobi", "World Cup Italia '90", "Phantasy Star II" and "Wing Commander". Kids and teenagers are watching TV shows such as "Alvin and the Chipmunks", "Pingu", "Adventures of the Little Koala" and "Saved by the Bell".

Popular toys at the moment include the likes of the Easy-Bake Oven, Transformers, Micro Machines and the Game Boy.

If you are looking for some childhood nostalgia, then check out October 24th, 1996 instead.

George W. Bush Snr. was the President of the United States on October 24th, 1990.

Margaret Thatcher was the Prime Minister of the United Kingdom on October 24th, 1990.

Enter your date of birth below to find out how old you were on October 24th, 1990.

Here are some fun statistics about October 24th, 1990.