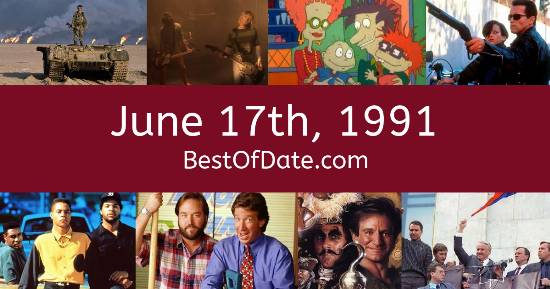 Songs that were on top of the music singles charts in the USA and the United Kingdom on June 17th, 1991:

The date is June 17th, 1991 and it's a Monday. Anyone born today will have the star sign Gemini. It's summer, so the temperatures are warmer and the evenings are longer than usual.

In America, the song Rush Rush by Paula Abdul is on top of the singles charts. Over in the UK, I Wanna Sex You Up by Color Me Badd is the number one hit song. George W. Bush Snr. is currently the President of the United States and the movie City Slickers is at the top of the Box Office.

It's 1991, so the airwaves are being dominated by artists such as Bryan Adams, Michael Jackson, Roxette, R.E.M., Color Me Badd and Paula Abdul. In Europe, the Soviet Union is continuing to dissolve. Meanwhile, in South Africa, the policy of apartheid has officially been ended.

In basketball, the Chicago Bulls have just won their first ever NBA Championship after beating the LA Lakers 4-1. In Europe, the Soviet Union is continuing to dissolve. Boris Yeltsin has just been elected as the first President of the newly-established Russian SFSR. Meanwhile, communist rule has recently come to an end in Albania. The film "Robin Hood: Prince of Thieves", starring Kevin Costner and Morgan Freeman, has just been released in movie theaters.

In the Philippines, over 800 people have been killed following the recent eruption of Mount Pinatubo. The body of former U.S. President Zachary Taylor has been exhumed in an effort to discover whether or not his death was caused by arsenic poisoning. On TV, people are watching popular shows such as "Only Fools and Horses", "Murder, She Wrote", "Seinfeld" and "Family Matters".

Meanwhile, gamers are playing titles such as "Duck Hunt", "SimCity", "Golden Axe" and "Railroad Tycoon". Kids and teenagers are watching TV shows such as "Adventures of the Little Koala", "Count Duckula", "Garfield and Friends" and "Clarissa Explains It All". Popular toys include the likes of "Easy-Bake Oven", "Jenga", "Polly Pocket" and "G.I. Joe (figures)".

Who was the Prime Minister of the United Kingdom on June 17th, 1991?

Looking for some nostalgia? Here are some Youtube videos relating to June 17th, 1991. Please note that videos are automatically selected by Youtube and that results may vary! Click on the "Load Next Video" button to view the next video in the search playlist. In many cases, you'll find episodes of old TV shows, documentaries, music videos and soap dramas.