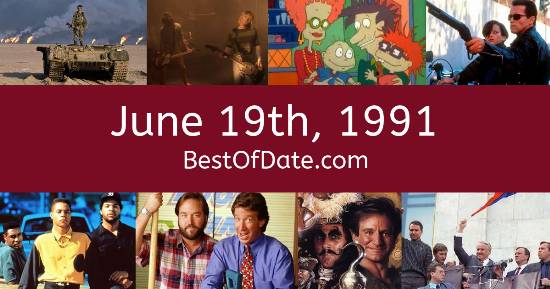 These songs were on top of the music charts in the United States and the United Kingdom on June 19th, 1991.

The movie "City Slickers" was at the top of the Box Office on this day.

The date is June 19th, 1991, and it's a Wednesday. Anyone born today will have the star sign Gemini. It's summer, so the temperatures are warmer and the evenings are longer than usual.

In America, the song Rush Rush by Paula Abdul is on top of the singles charts. Over in the UK, I Wanna Sex You Up by Color Me Badd is the number one hit song. George W. Bush Snr. is currently the President of the United States, and the movie City Slickers is at the top of the Box Office.

Meanwhile, in South Africa, the policy of apartheid has officially been ended. In basketball, the Chicago Bulls have just won their first ever NBA Championship after beating the LA Lakers 4-1. In Europe, the Soviet Union is continuing to dissolve. Boris Yeltsin has just been elected as the first President of the newly-established Russian SFSR. Meanwhile, communist rule has recently come to an end in Albania.

The film "Robin Hood: Prince of Thieves", starring Kevin Costner and Morgan Freeman, has just been released in movie theaters. In the Philippines, over 800 people have been killed following the recent eruption of Mount Pinatubo. The body of former U.S. President Zachary Taylor has been exhumed in an effort to discover whether or not his death was caused by arsenic poisoning.

Singer Bryan Adams has just released his new song "(Everything I Do) I Do It for You". If you were to travel back to this day, notable figures such as Miles Davis, Freddie Mercury, Robert Reed and Anthony Perkins would all be still alive. On TV, people are watching popular shows such as "Only Fools and Horses", "The Cosby Show", "Matlock" and "In the Heat of the Night".

These are trending news stories and fads that were prevalent at this time. These are topics that would have been in the media on June 19th, 1991.

News stories and other events that happened around June 19th, 1991.

Check out our personality summary for people who were born on June 19th, 1991.

If you are looking for some childhood nostalgia, then you should check out June 19th, 1997 instead.

John Major was the Prime Minister of the United Kingdom on June 19th, 1991.

Find out what your age was on June 19th, 1991, by entering your DOB below.
This information is not saved on our server.