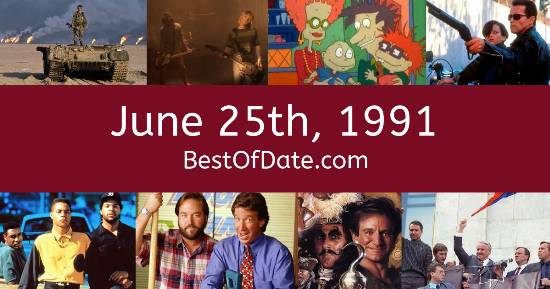 On June 25th, 1991, the following songs were at the top of the music charts in the USA and the UK.

The date is June 25th, 1991, and it's a Tuesday. Anyone born today will have the star sign Cancer. It's summer, so the temperatures are warmer and the evenings are longer than usual.

In America, the song Rush Rush by Paula Abdul is on top of the singles charts. Over in the UK, Any Dream Will Do by Jason Donovan is the number one hit song. George W. Bush Snr. is currently the President of the United States, and the movie Robin Hood: Prince of Thieves is at the top of the Box Office.

Meanwhile, in South Africa, the policy of apartheid has officially been ended. Singer Bryan Adams has just released his new song "(Everything I Do) I Do It for You". SEGA have just released a new video game called "Sonic the Hedgehog".

A potential crisis is unfolding in Iraq after Iraqi soldiers fire warning shots at a U.N. inspection team who attempted to intercept their vehicles. The country of Yugoslavia is dissolving following the decision of Croatia and Serbia to declare their independence. If you were to travel back to this day, notable figures such as Miles Davis, Freddie Mercury, Robert Reed and Anthony Perkins would all be still alive.

On TV, people are watching popular shows such as "Night Court", "Who's the Boss?", "The Golden Girls" and "Seinfeld". Meanwhile, gamers are playing titles such as "Duck Hunt", "SimCity", "Railroad Tycoon" and "Castle of Illusion Starring Mickey Mouse". Children and teenagers are currently watching television shows such as "Muppet Babies", "Pingu", "Garfield and Friends" and "Mr. Bean".

Popular toys at the moment include the likes of the Nintendo Entertainment System, the Ghostbusters Proton Pack, Teenage Mutant Hero Turtles figures and Yo-yo.

These are trending news stories and fads that were prevalent at this time. These are topics that would have been in the media on June 25th, 1991.

News stories, pop culture trends, and other events that happened around June 25th, 1991.

Check out our personality summary for people who were born on June 25th, 1991.

If you are looking for some childhood nostalgia, then you should check out June 25th, 1997, instead.

Celebrities, historical figures, and other notable people who were born on June 25th.

Find out what your age was on June 25th, 1991, by entering your DOB below.
This information is not saved on our server.