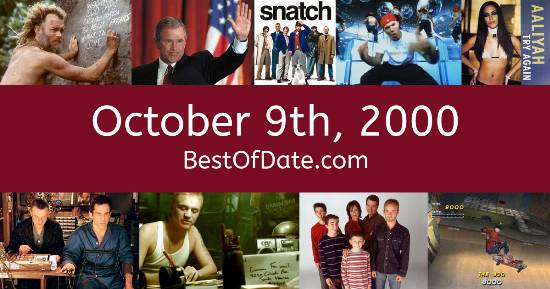 October 9th, 2000 relates to an event in a movie, book, game or television series:

Songs that were on top of the music singles charts in the USA and the United Kingdom on October 9th, 2000:

The date is October 9th, 2000 and it's a Monday. Anyone born today will have the star sign Libra. The summer is long gone. Temperatures have started to become much cooler and the evenings are beginning to get darker.

The Nokia 3310 is one of the most popular phones on the market at the moment. People are watching popular TV shows such as "Everybody Loves Raymond", "Beyond Belief: Fact or Fiction", "Recess" and "Futurama". Meanwhile, gamers are playing titles such as "Pokémon Red and Blue", "Pokémon Stadium", "Dead or Alive 2" and "Deus Ex".

Children and teenagers are currently watching television shows such as "The Simpsons", "Hang Time", "That '70s Show" and "Malcolm in the Middle". If you're a kid or a teenager, then you're probably playing with toys such as "PlayStation (PS1)", "The Dreamcast", "Poo-Chi (robot dog)" and "Razor (scooter)".

Celebrities, historical figures and noteable people that were born on the 9th of October:

National holidays and famous events that fall on the 9th of October:

Who was the Prime Minister of the United Kingdom on October 9th, 2000?

Enter your date of birth below to find out how old you were on October 9th, 2000.

Looking for some nostalgia? Here are some Youtube videos relating to October 9th, 2000. Please note that videos are automatically selected by Youtube and that results may vary! Click on the "Load Next Video" button to view the next video in the search playlist. In many cases, you'll find episodes of old TV shows, documentaries, music videos and soap dramas.

Here are some fun statistics about October 9th, 2000.