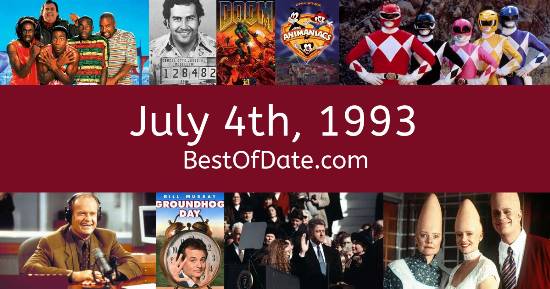 Songs that were on top of the music singles charts in the USA and the United Kingdom on July 4th, 1993:

The date is July 4th, 1993 and it's a Sunday. Anyone born today will have the star sign Cancer. Currently, people are enjoying their weekend.

America is celebrating the 4th of July, which means that fireworks are being set off and families are holding barbeques together. It's summer, so the temperatures are warmer and the evenings are longer than usual. In America, the song That's The Way Love Goes by Janet Jackson is on top of the singles charts.

Over in the UK, Dreams by Gabrielle is the number one hit song. Bill Clinton is currently the President of the United States and the movie Jurassic Park is at the top of the Box Office. In the United Kingdom, John Major is the current Prime Minister.

A playing discs game called "Pogs" is currently spreading in popularity throughout the world. It's 1993, so radio stations are being dominated by the likes of Meat Loaf, UB40, Snow, Haddaway, Whitney Houston, Take That, Janet Jackson and Mariah Carey. The films "Sleepless in Seattle" and "Dennis the Menace" have recently been released in movie theaters.

In soccer, Irish midfielder Roy Keane has joined Premier League winners Manchester United. In Turkey, 37 people have lost their lives at a hotel fire in Sivas, Turkey. The fire was started by an Islamist mob who were protesting against the presence of "The Satanic Verses" translator Aziz Nesin. People are watching popular TV shows such as "Star Trek: The Next Generation", "Mad About You", "Dr. Quinn, Medicine Woman" and "Star Trek: Deep Space Nine".

Who was the Prime Minister of the United Kingdom on July 4th, 1993?

Enter your date of birth below to find out how old you were on July 4th, 1993.

Looking for some nostalgia? Here are some Youtube videos relating to July 4th, 1993. Please note that videos are automatically selected by Youtube and that results may vary! Click on the "Load Next Video" button to view the next video in the search playlist. In many cases, you'll find episodes of old TV shows, documentaries, music videos and soap dramas.

Here are some fun statistics about July 4th, 1993.