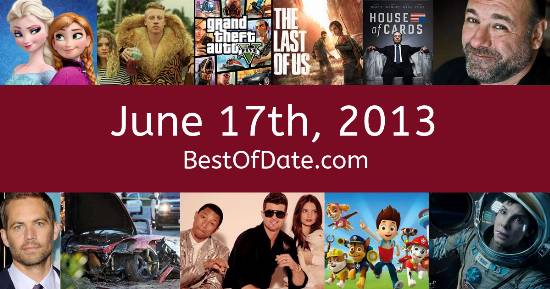 Songs that were on top of the music singles charts in the USA and the United Kingdom on June 17th, 2013:

The date is June 17th, 2013 and it's a Monday. Anyone born today will have the star sign Gemini. It's summer, so the temperatures are warmer and the evenings are longer than usual.

The song Blurred Lines by Robin Thicke is on top of the singles charts in both the USA and the United Kingdom. Barack Obama is currently the President of the United States and the movie Man of Steel is at the top of the Box Office. In the United Kingdom, David Cameron is the current Prime Minister.

It's 2013, so the music charts are being dominated by artists such as Macklemore, Robin Thicke, Imagine Dragons and Bruno Mars. A social networking website called Vine is extremely popular at the moment. Former NSA contractor Edward Snowden has just revealed to the public that American intelligence agencies have been running a widespread global surveillance programme called PRISM.

In Florida, George Zimmerman is facing murder charges for the shooting of Trayvon Martin. The game "Last of Us" has been released on the PlayStation 3. Avicii has released his single "Wake Me Up".

On TV, people are watching popular shows such as "Breaking Bad", "Sons of Anarchy", "White Collar" and "American Horror Story". Meanwhile, gamers are playing titles such as "Call of Duty: Black Ops II", "Tomb Raider", "Metro: Last Light" and "The Last of Us". Children and teenagers are currently watching television shows such as "The Fairly OddParents", "Big Time Rush", "Jessie" and "Dog with a Blog".

Who was the Prime Minister of the United Kingdom on June 17th, 2013?

Looking for some nostalgia? Here are some Youtube videos relating to June 17th, 2013. Please note that videos are automatically selected by Youtube and that results may vary! Click on the "Load Next Video" button to view the next video in the search playlist. In many cases, you'll find episodes of old TV shows, documentaries, music videos and soap dramas.