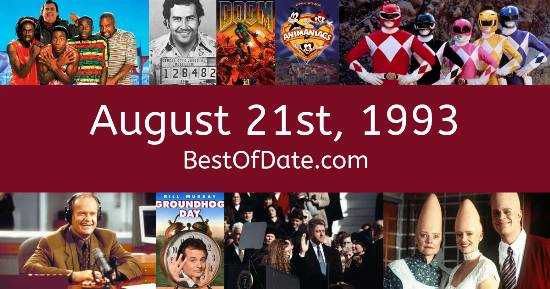 Songs that were on top of the music singles charts in the USA and the United Kingdom on August 21st, 1993:

The date is August 21st, 1993 and it's a Saturday. Anyone born today will have the star sign Leo. Currently, people are enjoying their weekend.

The summer of 1993 is coming to an end and fall is just around the corner. In America, the song Can't Help Falling In Love by UB40 is on top of the singles charts. Over in the UK, Living On My Own by Freddie Mercury is the number one hit song.

Bill Clinton is currently the President of the United States and the movie Rising Sun is at the top of the Box Office. In the United Kingdom, John Major is the current Prime Minister. In fashion, many of the trends from the late 80s are still in vogue. Colored tights, denim overalls, leotards, flannel shirts and shoulder pads are all fashionable at the moment. Grunge fashion has also become mainstream, popularizing band t-shirts, ripped jeans, mom jeans and Doc Martens.

News has recently come to light that the father of NBA star Michael Jordan has been found murdered in South Carolina. The body of 57-year-old James Jordan was discovered earlier this month in a creek. In celebrity news, Alec Baldwin and actress Kim Basinger have just been married. It has been announced that NASA has lost radio contact with its spacecraft the Mars Observer. The loss in communication occurred just days before it was due to begin entry into the planet's atmosphere.

Who was the Prime Minister of the United Kingdom on August 21st, 1993?

Enter your date of birth below to find out how old you were on August 21st, 1993.

Looking for some nostalgia? Here are some Youtube videos relating to August 21st, 1993. Please note that videos are automatically selected by Youtube and that results may vary! Click on the "Load Next Video" button to view the next video in the search playlist. In many cases, you'll find episodes of old TV shows, documentaries, music videos and soap dramas.