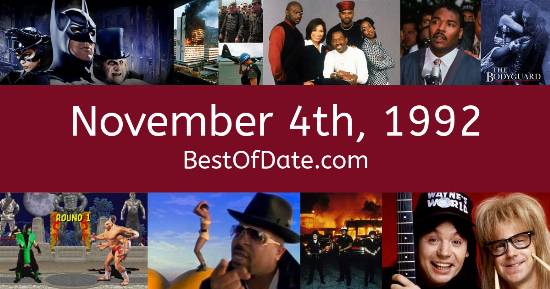 Songs that were on top of the music singles charts in the USA and the United Kingdom on November 4th, 1992.

The date is November 4th, 1992 and it's a Wednesday. Anyone born today will have the star sign Scorpio. It's November, so the evenings are getting darker and the days are getting colder.

The song End Of The Road by Boyz II Men is on top of the singles charts in both the USA and the United Kingdom. George W. Bush Snr. is currently the President of the United States and the movie Under Siege is at the top of the Box Office. In the United Kingdom, John Major is the current Prime Minister.

In fashion, many of the trends from the late 80s are still in vogue. Colored tights, denim overalls, leotards, flannel shirts and shoulder pads are all fashionable at the moment. Grunge fashion has also become mainstream, popularizing band t-shirts, ripped jeans, mom jeans and Doc Martens. In Europe, a war is continuing to rage on in Bosnia and Herzegovina. American rock band Rage Against the Machine have just released their controversial new single "Killing in the Name".

In US politics, Democratic Party nominee Bill Clinton has just been elected as the new president of the United States. Clinton defeated Republican incumbent George H. W. Bush by a wide margin. If you were to travel back to this day, notable figures such as Audrey Hepburn, Thurgood Marshall, Andre the Giant and Bobby Moore would all be still alive. On TV, people are watching popular shows such as "Last of the Summer Wine", "Knots Landing", "In the Heat of the Night" and "Rugrats".

Meanwhile, gamers are playing titles such as "F-Zero", "Super Castlevania IV", "Yoshi" and "Super Mario Kart". Children and teenagers are currently watching television shows such as "The Adventures of Pete & Pete", "Doug", "Barney & Friends" and "X-Men: The Animated Series". Popular toys at the moment include the likes of My Little Pony (figures), Transformers, the Ghostbusters Proton Pack and Littlest Pet Shop.

If you are looking for some childhood nostalgia, then check out November 4th, 1998 instead.

George W. Bush Snr. was the President of the United States on November 4th, 1992.

John Major was the Prime Minister of the United Kingdom on November 4th, 1992.

Enter your date of birth below to find out how old you were on November 4th, 1992.

Here are some fun statistics about November 4th, 1992.

Have something to say about November 4th, 1992?