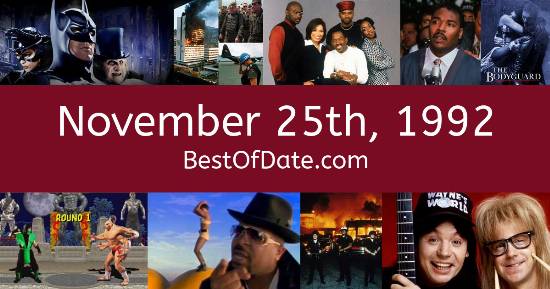 On November 25th, 1992, the following songs were at the top of the music charts in the USA and the UK.

The top "Box Office" movie on this date was the film "Bram Stoker's Dracula".

The date is November 25th, 1992, and it's a Wednesday. Anyone born today will have the star sign Sagittarius. In America, it is the day before Thanksgiven Day and people are looking forward to tomorrow's dinner.

George W. Bush Snr. is currently the President of the United States, and the movie Bram Stoker's Dracula is at the top of the Box Office. In the United Kingdom, John Major is the current Prime Minister. Texting is not a thing yet. Instead, people are using landline phones and pagers. Furthermore, the vast majority of people still have no idea what "the Internet" is.

In Europe, a war is continuing to rage on in Bosnia and Herzegovina. In music, singer Whitney Houston has recently released her new soundtrack album "The Bodyguard". The album contains songs such as "I Will Always Love You" and "I'm Every Woman". Disney's "Aladdin" and "The Bodyguard", starring Whitney Houston and Kevin Costner, have both been released in movie theaters. Meanwhile, the film "Home Alone 2: Lost in New York" is also showing on the big screen.

In Europe, the Federal Assembly in Czechoslovakia has recently voted to split the country into the Czech Republic and Slovakia. The change will take effect on the 1st of January of next year. If you were to travel back to this day, notable figures such as Audrey Hepburn, Thurgood Marshall, Andre the Giant and Bobby Moore would all be still alive. On TV, people are watching popular shows such as "Murder, She Wrote", "Family Matters", "Dinosaurs" and "Step by Step".

Meanwhile, gamers are playing titles such as "Duck Hunt", "Civilization", "Wolfenstein 3D" and "Super Mario Kart". Children and teenagers are currently watching television shows such as "Count Duckula", "Doogie Howser, M.D.", "Rugrats" and "Goof Troop". If you're a kid or a teenager, then you're probably playing with toys such as Cabbage Patch Kids, My Little Pony (figures), the Ghostbusters Proton Pack and the Sega Genesis / Mega Drive.

These are trending news stories and fads that were prevalent at this time. These are topics that would have been in the media on November 25th, 1992.

News stories and other events that happened around November 25th, 1992.

Check out our personality summary for people who were born on November 25th, 1992.

Television shows that people were watching in November, 1992.

Popular video games that people were playing in November of 1992.

If you are looking for some childhood nostalgia, then you should check out November 25th, 1998 instead.

George W. Bush Snr. was the President of the United States on November 25th, 1992.

Find out what your age was on November 25th, 1992, by entering your DOB below.
This information is not saved on our server.

Here are some fun statistics about November 25th, 1992.