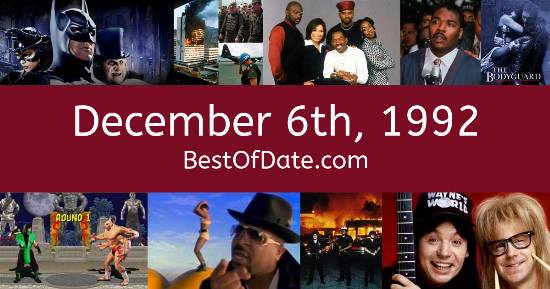 These songs were on top of the music charts in the United States and the United Kingdom on December 6th, 1992.

The date is December 6th, 1992, and it's a Sunday. Anyone born today will have the star sign Sagittarius. Currently, people are enjoying their weekend.

The Christmas season of 1992 has began. The song I Will Always Love You by Whitney Houston is on top of the singles charts in both the USA and the United Kingdom. George W. Bush Snr. is currently the President of the United States, and the movie Home Alone 2: Lost in New York is at the top of the Box Office.

Disney's "Aladdin" and "The Bodyguard", starring Whitney Houston and Kevin Costner, are both being shown in movie theaters at the moment. US military forces have arrived in Somalia to help guarantee the delivery of humanitarian aid. Over the past few months, the situation in the country has continued to worsen, with factions continuing to splinter into smaller groups. This has made it extremely difficult for the UN to negotiate with faction leaders over food distribution. If you were to travel back to this day, notable figures such as Audrey Hepburn, Thurgood Marshall, Andre the Giant and Bobby Moore would all be still alive.

On TV, people are watching popular shows such as "Only Fools and Horses", "Sherlock Holmes", "Roseanne" and "Family Matters". Meanwhile, gamers are playing titles such as "Desert Strike ", "Teenage Mutant Ninja Turtles III: The Manhattan Project", "Yoshi" and "Mortal Kombat". Kids and teenagers are watching TV shows such as "Mister Rogers' Neighborhood", "Alvin and the Chipmunks", "Dinosaurs" and "The Little Mermaid".

Popular toys at the moment include the likes of the Easy-Bake Oven, Micro Machines, the Game Boy and Yo-yo.

These are trending news stories and fads that were prevalent at this time. These are topics that would have been in the media on December 6th, 1992.

Check out our personality summary for people who were born on December 6th, 1992.

Television shows that people were watching in December, 1992.

Popular video games that people were playing in December of 1992.

If you are looking for some childhood nostalgia, then you should check out December 6th, 1998 instead.

NBA player.
Born on December 6th, 1994
He was born exactly 2 years after this date.

George W. Bush Snr. was the President of the United States on December 6th, 1992.

John Major was the Prime Minister of the United Kingdom on December 6th, 1992.

Enter your date of birth below to find out how old you were on December 6th, 1992.
This information is not transmitted to our server.

Here are some fun statistics about December 6th, 1992.