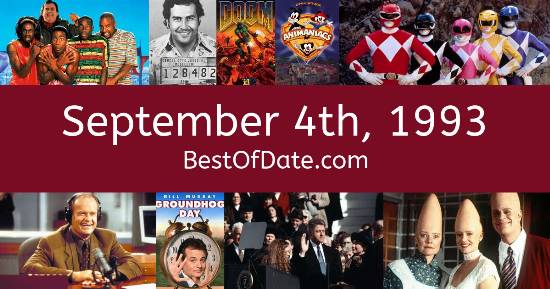 Songs that were on top of the music singles charts in the USA and the United Kingdom on September 4th, 1993.

The date is September 4th, 1993 and it's a Saturday. Anyone born today will have the star sign Virgo. Currently, people are enjoying their weekend.

Schools and colleges are starting again and Autumn has officially arrived. As a result, temperatures are beginning to cool and trees are starting to shed their leaves. In the United States, it is Labor Day weekend. People are attending barbecues and other gatherings. To many Americans, Labor Day represents the end of summer 1993. In America, the song Can't Help Falling In Love by UB40 is on top of the singles charts.

Over in the UK, Mr. Vain by Culture Beat is the number one hit song. Bill Clinton is currently the President of the United States and the movie Rising Sun is at the top of the Box Office. In the United Kingdom, John Major is the current Prime Minister.

People are currently shocked by recent news reports that pop icon Michael Jackson is currently under investigation for child sexual abuse. In response to the claims, Jackson has labelled them as "extortion". In television news, a new children's show called the "Mighty Morphin Power Rangers" has recently made its debut. Singer Mariah Carey has just released her new album "Music Box". The album contains songs such as "Dreamlover" and "Hero".

In Europe, the last Russian troops in the former Soviet state of Lithuania have left the country. Death Row rap star Snoop Dogg and his bodyguard have been charged with the murder of a rival gang member. Meanwhile, the music video for "Jeremy" by American rock band Pearl Jam has just won "Video of the Year" at the 1993 MTV VMA awards. If you were to travel back to this day, notable figures such as Vincent Price, River Phoenix, Frank Zappa and Bill Hicks would all be still alive.

On TV, people are watching popular shows such as "Last of the Summer Wine", "Full House", "Seinfeld" and "Melrose Place". Meanwhile, gamers are playing titles such as "Desert Strike ", "Ecco the Dolphin", "Mortal Kombat" and "Super Mario Land 2: 6 Golden Coins". Children and teenagers are currently watching television shows such as "Fireman Sam", "Garfield and Friends", "The Simpsons" and "Beverly Hills, 90210".

If you're a kid or a teenager, then you're probably playing with toys such as Yo-yo, Nerf Blaster, Teen Talk Barbie and Action Man.

If you are looking for some childhood nostalgia, then check out September 4th, 1999 instead.

Bill Clinton was the President of the United States on September 4th, 1993.

John Major was the Prime Minister of the United Kingdom on September 4th, 1993.

Enter your date of birth below to find out how old you were on September 4th, 1993.

Here are some fun statistics about September 4th, 1993.

Have something to say about September 4th, 1993?