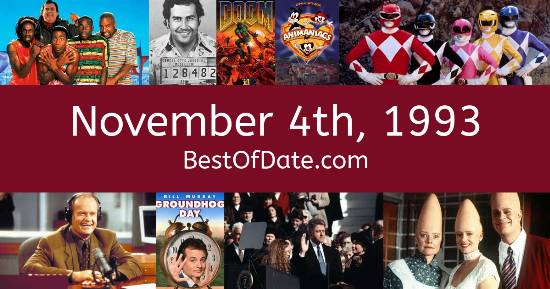 Songs that were on top of the music singles charts in the USA and the United Kingdom on November 4th, 1993.

The movie "The Beverly Hillbillies" was at the top of the Box Office on November 4th, 1993.

The date is November 4th, 1993, and it's a Thursday. Anyone born today will have the star sign Scorpio. It's November, so the evenings are getting darker and the days are getting colder.

In America, the song Dream Lover by Mariah Carey is on top of the singles charts. Over in the UK, I'd Do Anything For Love by Meat Loaf is the number one hit song. Bill Clinton is currently the President of the United States, and the movie The Beverly Hillbillies is at the top of the Box Office.

It's 1993, so radio stations are being dominated by the likes of Meat Loaf, UB40, Snow, Haddaway, Whitney Houston, Take That, Janet Jackson and Mariah Carey. A stop-motion dark comedy film called "The Nightmare Before Christmas" has just been released in movie theaters. Meanwhile, controversial rap star Tupac Shakur has recently been charged with the shooting of two off-duty policemen in Atlanta, Georgia.

Tributes are currently pouring in for actor River Phoenix, who has died from a drugs overdose at the age of 23. A new political and economic union called the European Union has just been formally established. Boxing fans are currently looking forward to Evander Holyfield's rematch fight against Riddick Bowe. The fight will follow last year's event, which saw Riddick Bowe defeat Holyfield and win the undisputed world heavyweight championship.

On television, a new sitcom called "The Nanny" has been aired for the first time. In Canada, Liberal Party leader Jean Chretien has become the new Prime Minister. If you were to travel back to this day, notable figures such as Frank Zappa, Bill Hicks, John Candy and Kurt Cobain would all be still alive.

On TV, people are watching popular shows such as "Sherlock Holmes", "Roseanne", "Beavis and Butt-Head" and "The Nanny". Meanwhile, gamers are playing titles such as "Mortal Kombat", "Tecmo NBA Basketball", "Tiny Toon Adventures 2: Trouble in Wackyland" and "Mortal Kombat II". Children and teenagers are currently watching television shows such as "Thomas the Tank Engine", "Beverly Hills, 90210", "Rugrats" and "Batman: The Animated Series".

Popular toys at the moment include the likes of the Easy-Bake Oven, Cabbage Patch Kids, Lego Pirates and Nerf Blaster.

These are trending news stories and fads that were prevalent at this time. These are topics that would have been in the media on November 4th, 1993.

Check out our personality summary for people who were born on November 4th, 1993.

If you are looking for some childhood nostalgia, then you should check out November 4th, 1999 instead.

Bill Clinton was the President of the United States on November 4th, 1993.

John Major was the Prime Minister of the United Kingdom on November 4th, 1993.

Enter your date of birth below to find out how old you were on November 4th, 1993.
This information is not transmitted to our server.

Here are some fun statistics about November 4th, 1993.