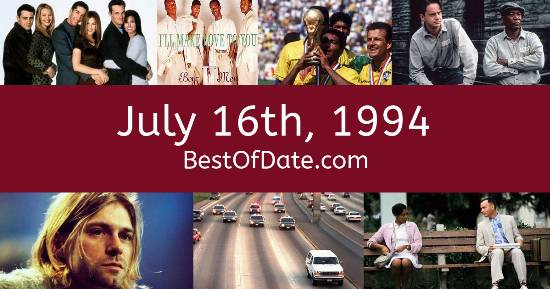 Songs that were on top of the music singles charts in the USA and the United Kingdom on July 16th, 1994.

The date is July 16th, 1994 and it's a Saturday. Anyone born today will have the star sign Cancer. Currently, people are enjoying their weekend.

Bill Clinton is currently the President of the United States and the movie True Lies is at the top of the Box Office. In the United Kingdom, John Major is the current Prime Minister. In fashion, "grunge" clothing has declined in popularity and women are beginning to wear form-fitting outfits such as slip dresses and pencil skirts. Movies such as Clueless and The Craft have popularized the "sexy school girl" look.

It's 1994, so radio stations are being dominated by the likes of All-4-One, Boyz II Men, R. Kelly, Céline Dion, Bruce Springsteen, Bryan Adams, Meat Loaf, Bon Jovi, Wet Wet Wet, Rednex and Mariah Carey. In Europe, a war is continuing to rage on in Bosnia and Herzegovina. In the United States, the 1994 FIFA World Cup is being held.

In North Korea, "Supreme Leader" Kim Il-sung has passed away at the age of 82. Il-sung, who has lead the country since it was founded, is believed to have died from a heart attack. In Germany, the last allied forces have left the country. This marks the final end of Germany's occupation, which began in 1945. On TV, people are watching popular shows such as "Murder, She Wrote", "One Foot in the Grave", "Batman: The Animated Series" and "The Nanny".

Meanwhile, gamers are playing titles such as "Shinobi III: Return of the Ninja Master", "Gunstar Heroes", "NBA Jam" and "Disney's Aladdin". Kids and teenagers are watching TV shows such as "Married... with Children", "Garfield and Friends", "The Fresh Prince of Bel-Air" and "Clarissa Explains It All". If you're a kid or a teenager, then you're probably playing with toys such as Micro Machines, Yo-yo, Pogs and Littlest Pet Shop.

A Spotify playlist of songs from the year 1994. Take a trip back to the days of Wet Wet Wet, the Cranberries, Bon Jovi and Ace of Base.

Celebrities, historical figures and notable people who were born on the 16th of July.

Bill Clinton was the President of the United States on July 16th, 1994.

John Major was the Prime Minister of the United Kingdom on July 16th, 1994.

Leave a comment and tell everyone why July 16th, 1994 is important to you.