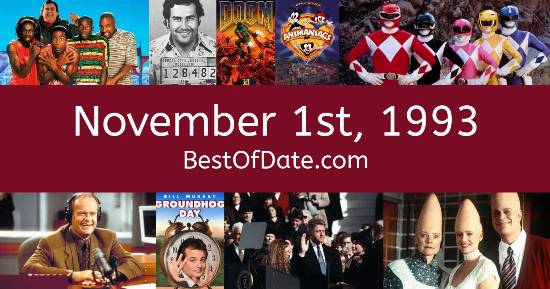 Songs that were on top of the music singles charts in the USA and the United Kingdom on November 1st, 1993.

The movie "The Beverly Hillbillies" was at the top of the box office on November 1st, 1993.

The date is November 1st, 1993 and it's a Monday. Anyone born today will have the star sign Scorpio. Halloween has just come and passed.

It's November, so the evenings are getting darker and the days are getting colder. In America, the song Dream Lover by Mariah Carey is on top of the singles charts. Over in the UK, I'd Do Anything For Love by Meat Loaf is the number one hit song.

Bill Clinton is currently the President of the United States and the movie The Beverly Hillbillies is at the top of the Box Office. In the United Kingdom, John Major is the current Prime Minister. In fashion, many of the trends from the late 80s are still in vogue. Colored tights, denim overalls, leotards, flannel shirts and shoulder pads are all fashionable at the moment. Grunge fashion has also become mainstream, popularizing band t-shirts, ripped jeans, mom jeans and Doc Martens.

It's 1993, so radio stations are being dominated by the likes of Meat Loaf, UB40, Snow, Haddaway, Whitney Houston, Take That, Janet Jackson and Mariah Carey. A stop-motion dark comedy film called "The Nightmare Before Christmas" has just been released in movie theaters. Meanwhile, controversial rap star Tupac Shakur has recently been charged with the shooting of two off-duty policemen in Atlanta, Georgia.

Tributes are currently pouring in for actor River Phoenix, who has died from a drugs overdose at the age of 23. A new political and economic union called the European Union has just been formally established. Boxing fans are currently looking forward to Evander Holyfield's rematch fight against Riddick Bowe. The fight will follow last year's event, which saw Riddick Bowe defeat Holyfield and win the undisputed world heavyweight championship.

On TV, people are watching popular shows such as "Full House", "Roseanne", "Clarissa Explains It All" and "Boy Meets World". Meanwhile, gamers are playing titles such as "Duck Hunt", "Desert Strike ", "Gunstar Heroes" and "NBA Jam". Children and teenagers are currently watching television shows such as "Fireman Sam", "Clarissa Explains It All", "The Animals of Farthing Wood" and "Bill Nye the Science Guy".

Popular toys at the moment include the likes of Micro Machines, Polly Pocket, Littlest Pet Shop and the Talkboy.

If you are looking for some childhood nostalgia, then check out November 1st, 1999 instead.

Bill Clinton was the President of the United States on November 1st, 1993.

John Major was the Prime Minister of the United Kingdom on November 1st, 1993.

Enter your date of birth below to find out how old you were on November 1st, 1993.

Here are some fun statistics about November 1st, 1993.

Have something to say about November 1st, 1993?