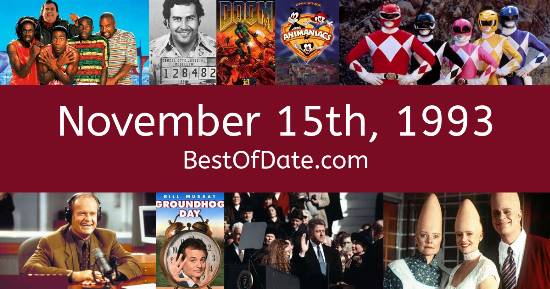 These songs were on top of the music charts in the United States and the United Kingdom on November 15th, 1993.

The movie "The Three Musketeers (1993)" was at the top of the Box Office on this day.

The date is November 15th, 1993, and it's a Monday. Anyone born today will have the star sign Scorpio. It's November, so the evenings are getting darker and the days are getting colder.

The song I'd Do Anything For Love by Meat Loaf is on top of the singles charts in both the USA and the United Kingdom. Bill Clinton is currently the President of the United States, and the movie The Three Musketeers (1993) is at the top of the Box Office. In the United Kingdom, John Major is the current Prime Minister.

If you were to travel back to this day, notable figures such as Frank Zappa, Bill Hicks, John Candy and Kurt Cobain would all be still alive. On TV, people are watching popular shows such as "Last of the Summer Wine", "Sherlock Holmes", "In the Heat of the Night" and "Roseanne". Meanwhile, gamers are playing titles such as "The Legend of Zelda: A Link to the Past", "Super Mario Land 2: 6 Golden Coins", "Gunstar Heroes" and "Myst".

Children and teenagers are currently watching television shows such as "Garfield and Friends", "The Adventures of Pete & Pete", "The Animals of Farthing Wood" and "Rocko's Modern Life". Popular toys at the moment include the likes of Micro Machines, the SEGA Game Gear, the Super Nintendo Entertainment System (SNES) and Teen Talk Barbie.

These are trending news stories and fads that were prevalent at this time. These are topics that would have been in the media on November 15th, 1993.

News stories and other events that happened around November 15th, 1993.

Check out our personality summary for people who were born on November 15th, 1993.

If you are looking for some childhood nostalgia, then you should check out November 15th, 1999 instead.

Rugby player.
Born on November 15th, 1996
He was born exactly 3 years after this date.

Bill Clinton was the President of the United States on November 15th, 1993.

Find out what your age was on November 15th, 1993, by entering your DOB below.
This information is not saved on our server.

Here are some fun statistics about November 15th, 1993.