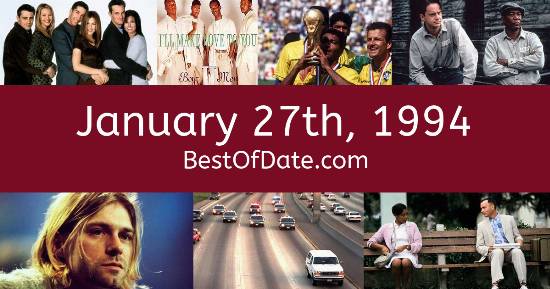 Songs that were on top of the music singles charts in the USA and the United Kingdom on January 27th, 1994.

The movie "Philadelphia" was at the top of the box office on January 27th, 1994.

The date is January 27th, 1994 and it's a Thursday. Anyone born today will have the star sign Aquarius. In America, the song All For Love by Bryan Adams, Rod Stewart & Sting is on top of the singles charts.

Over in the UK, Things Can Only Get Better by D:ream is the number one hit song. Bill Clinton is currently the President of the United States and the movie Philadelphia is at the top of the Box Office. In the United Kingdom, John Major is the current Prime Minister.

In Europe, a war is continuing to rage on in Bosnia and Herzegovina. Meanwhile, in technology news, a relatively new storage format called the CD is beginning to outpace the regular cassette tape in music sales. The disc-based format gives listeners the ability to skip between songs instead of having to manually rewind and forward. A new form of communication called "text messaging" is continuing to grow in popularity. However, it can only be done if both the sender and the receiver are on the same cell network.

Tributes are pouring in for former Manchester United manager Matt Busby, who has passed away at the age of 84. In music, rock band Alice in Chains have released their third album "Jar of Flies". A former student has fired blank shots from a starting pistol at Prince Charles during his royal tour in Sydney, Australia. The incident occurred while Charles was handing out awards at a ceremony on Australia Day.

If you were to travel back to this day, notable figures such as Bill Hicks, John Candy, Kurt Cobain and Richard Nixon would all be still alive. On TV, people are watching popular shows such as "In the Heat of the Night", "Dinosaurs", "Home Improvement" and "Lois & Clark: The New Adventures of Superman". Meanwhile, gamers are playing titles such as "Mortal Kombat", "Shinobi III: Return of the Ninja Master", "NBA Jam" and "Jungle Strike".

Kids and teenagers are watching TV shows such as "Dinosaurs", "Hangin' with Mr. Cooper", "Boy Meets World" and "The Nanny". Popular toys at the moment include the likes of Screwball Scramble, Micro Machines, Lego Pirates and Littlest Pet Shop.

If you are looking for some childhood nostalgia, then check out January 27th, 2000 instead.

Bill Clinton was the President of the United States on January 27th, 1994.

John Major was the Prime Minister of the United Kingdom on January 27th, 1994.

Enter your date of birth below to find out how old you were on January 27th, 1994.

Here are some fun statistics about January 27th, 1994.