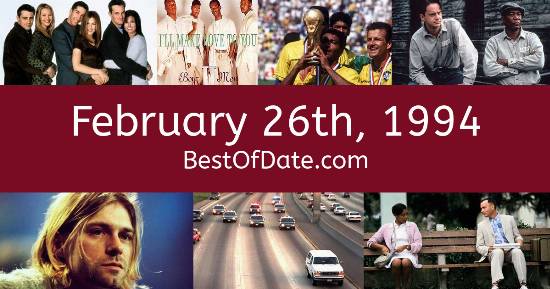 Songs that were on top of the music singles charts in the USA and the United Kingdom on February 26th, 1994:

The date is February 26th, 1994 and it's a Saturday. Anyone born today will have the star sign Pisces. Currently, people are enjoying their weekend.

The 1994 Winter Olympics are currently taking place in Lillehammer, Norway. In Europe, a war is continuing to rage on in Bosnia and Herzegovina. In Gloucester, England, police are currently excavating the garden of suspected serial killer Fred West.

In the Palestinian city Hebron, 29 people have tragically lost their lives in a shooting massacre. The attacker, an American-Israeli extremist called Baruch Goldstein, was beaten to death by survivors in the aftermath of the shooting. Tributes are currently pouring in for comedian Bill Hicks, who has recently passed away at the age of 32 from pancreatic cancer. Hicks had been diagnosed with the disease in June of 1993. People are watching popular TV shows such as "Murder, She Wrote", "Matlock", "Mad About You" and "The X-Files".

Meanwhile, gamers are playing titles such as "Syndicate", "Mortal Kombat II", "NBA Jam" and "Disney's Aladdin". Kids and teenagers are watching TV shows such as "Full House", "Fireman Sam", "Blossom" and "Biker Mice from Mars". If you're a kid or a teenager, then you're probably playing with toys such as "Easy-Bake Oven", "Transformers", "Jenga" and "Super Soaker (water gun)".

Celebrities and historical figures that were born on the 26th of February:

Who was the Prime Minister of the United Kingdom on February 26th, 1994?

Enter your date of birth below to find out how old you were on February 26th, 1994.

Looking for some nostalgia? Here are some Youtube videos relating to February 26th, 1994. Please note that videos are automatically selected by Youtube and that results may vary! Click on the "Load Next Video" button to view the next video in the search playlist. In many cases, you'll find episodes of old TV shows, documentaries, music videos and soap dramas.

Here are some fun statistics about February 26th, 1994.