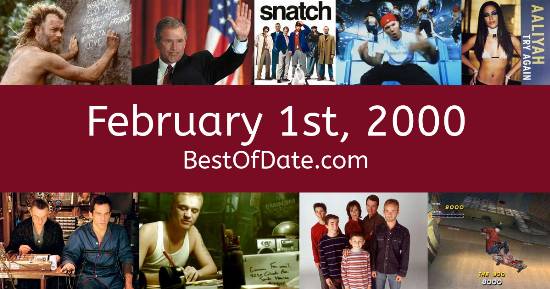 Songs that were on top of the music singles charts in the USA and the United Kingdom on February 1st, 2000.

The movie "Eye of the Beholder" was at the top of the Box Office on February 1st, 2000.

The date is February 1st, 2000, and it's a Tuesday. Anyone born today will have the star sign Aquarius. In America, the song I Knew I Loved You by Savage Garden is on top of the singles charts.

Over in the UK, Born To Make You Happy by Britney Spears is the number one hit song. Bill Clinton is currently the President of the United States, and the movie Eye of the Beholder is at the top of the Box Office. In the United Kingdom, Tony Blair is the current Prime Minister.

It's the year 2000, so the music charts are being dominated by the likes of Christina Aguilera, Faith Hill, Savage Garden, Destiny's Child, Santana, Sisqó, Creed, Aaliyah and Enrique Iglesias. If you were to travel back to this day, notable figures such as Big Pun, Tom Landry, David Tomlinson and Walter Matthau would all be still alive. On TV, people are watching popular shows such as "Star Trek: Voyager", "Xena: Warrior Princess", "7th Heaven" and "Celebrity Deathmatch".

Meanwhile, gamers are playing titles such as "Super Smash Bros.", "Ape Escape", "Mario Golf" and "WWF Attitude". Kids and teenagers are watching TV shows such as "The Simpsons", "Superman: The Animated Series", "Daria" and "CatDog". Popular toys at the moment include the likes of the PlayStation (PS1), Betty Spaghetty (doll), the Game Boy Color and the Dreamcast.

These are trending news stories and fads that were prevalent at this time. These are topics that would have been in the media on February 1st, 2000.

News stories and other events that happened around February 1st, 2000.

Check out our personality summary for people who were born on February 1st, 2000.

Television shows that people were watching in February, 2000.

Popular video games that people were playing in February of 2000.

If you are looking for some childhood nostalgia, then you should check out February 1st, 2006 instead.

Bill Clinton was the President of the United States on February 1st, 2000.

Tony Blair was the Prime Minister of the United Kingdom on February 1st, 2000.

Find out what your age was on February 1st, 2000, by entering your DOB below.
This information is not saved on our server.

Here are some fun statistics about February 1st, 2000.