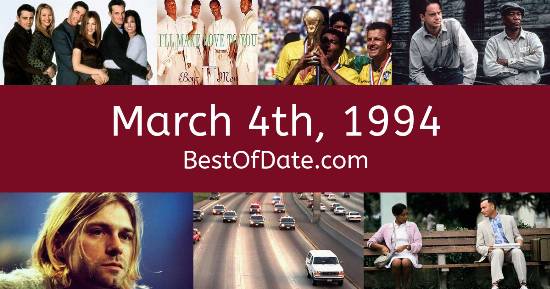 Songs that were on top of the music singles charts in the USA and the United Kingdom on March 4th, 1994.

The movie "Ace Ventura: Pet Detective" was at the top of the box office on March 4th, 1994.

The date is March 4th, 1994 and it's a Friday. Anyone born today will have the star sign Pisces. Currently, people have "that Friday feeling" and are looking forward to the weekend.

Bill Clinton is currently the President of the United States and the movie Ace Ventura: Pet Detective is at the top of the Box Office. In the United Kingdom, John Major is the current Prime Minister. Meanwhile, in technology news, a relatively new storage format called the CD is beginning to outpace the regular cassette tape in music sales. The disc-based format gives listeners the ability to skip between songs instead of having to manually rewind and forward.

In the Palestinian city Hebron, 29 people have tragically lost their lives in a shooting massacre. The attacker, an American-Israeli extremist called Baruch Goldstein, was beaten to death by survivors in the aftermath of the shooting. Tributes are currently pouring in for comedian Bill Hicks, who has recently passed away at the age of 32 from pancreatic cancer. Hicks had been diagnosed with the disease in June of 1993. In Gloucester, England, suspected serial killer Fred West and his wife have been arrested by police. The arrests follow recent excavations at their home in Wests' Cromwell Street.

The are fears for the life of Nirvana lead singer Kurt Cobain, who is currently in a coma in Rome, Italy. Cobain is believed to have overdosed on Rohypnol and champagne. US troops have withdrawn from Somalia earlier than expected. Initially, the deadline had been set for March 31st. People are currently shocked by the death of actor John Candy, who recently died from a heart attack while vacationing in Durango, Mexico. Candy was only 43 years old and had been filming for the Western parody film "Wagons East".

Meanwhile, in Florida, anti-abortionist Michael Griffin has been found guilty of last year's murder of American physician Dr. David Gunn. On TV, people are watching popular shows such as "Matlock", "One Foot in the Grave", "Blossom" and "Dr. Quinn, Medicine Woman". Meanwhile, gamers are playing titles such as "Gunstar Heroes", "NBA Jam", "Disney's Aladdin" and "Doom".

Kids and teenagers are watching TV shows such as "Dinosaurs", "Barney & Friends", "Biker Mice from Mars" and "The Nanny". Popular toys at the moment include the likes of the Easy-Bake Oven, Jenga, the Game Boy and Pogs.

If you are looking for some childhood nostalgia, then check out March 4th, 2000 instead.

Bill Clinton was the President of the United States on March 4th, 1994.

John Major was the Prime Minister of the United Kingdom on March 4th, 1994.

Enter your date of birth below to find out how old you were on March 4th, 1994.

Here are some fun statistics about March 4th, 1994.