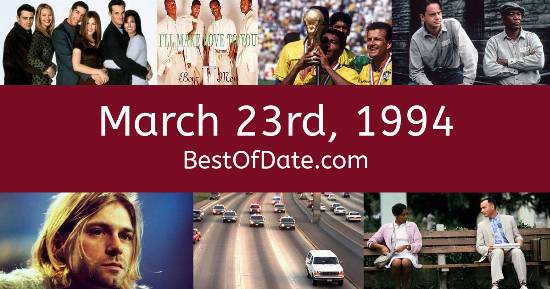 Songs that were on top of the music singles charts in the USA and the United Kingdom on March 23rd, 1994.

The date is March 23rd, 1994 and it's a Wednesday. Anyone born today will have the star sign Aries. Spring has arrived and the days have become longer.

In America, the song The Sign by Ace of Base is on top of the singles charts. Over in the UK, Doop by Doop is the number one hit song. Bill Clinton is currently the President of the United States and the movie The Naked Gun 33 1/3 is at the top of the Box Office.

In Europe, a war is continuing to rage on in Bosnia and Herzegovina. In wrestling, Bret Hart has defeated Yokozuna at WrestleMania X in Madison Square Garden in New York City. A grand jury in Portland has just announced that there is evidence that Tonya Harding participated in the attack plot on rival figure skater Nancy Kerrigan back in January.

In Mexico, presidential candidate Luis Donaldo Colosio has been shot dead in Tijuana. His assassination occurred during a campaign rally. In North Carolina, 24 US soldiers have lost their lives in a mid-air collision at the Pope Field air base in Cumberland County. If you were to travel back to this day, notable figures such as Kurt Cobain, Richard Nixon, Nicole Brown Simpson and Andrés Escobar would all be still alive.

On TV, people are watching popular shows such as "Married... with Children", "One Foot in the Grave", "Dinosaurs" and "Melrose Place". Meanwhile, gamers are playing titles such as "Syndicate", "Mortal Kombat II", "Shinobi III: Return of the Ninja Master" and "Doom". Children and teenagers are currently watching television shows such as "Teenage Mutant Ninja Turtles", "Garfield and Friends", "Beverly Hills, 90210" and "X-Men: The Animated Series".

If you're a kid or a teenager, then you're probably playing with toys such as Transformers, the Game Boy, Lego Pirates and Action Man.

If you are looking for some childhood nostalgia, then check out March 23rd, 2000 instead.

Love Island winner.
Born on March 23rd, 1995
He was born exactly one year after this date.

Bill Clinton was the President of the United States on March 23rd, 1994.

John Major was the Prime Minister of the United Kingdom on March 23rd, 1994.

Enter your date of birth below to find out how old you were on March 23rd, 1994.