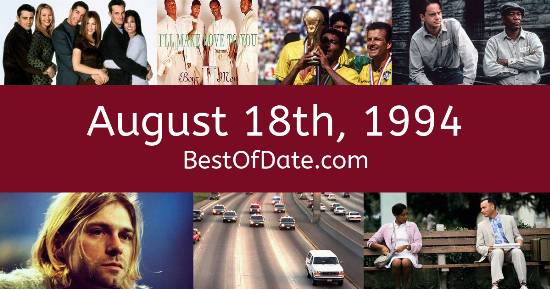 These songs were on top of the music charts in the United States and the United Kingdom on August 18th, 1994.

The movie "Clear and Present Danger" was at the top of the Box Office on this day.

The date is August 18th, 1994, and it's a Thursday. Anyone born today will have the star sign Leo. It's summer, so the temperatures are warmer and the evenings are longer than usual.

In America, the song Stay by Lisa Loeb & Nine Stories is on top of the singles charts. Over in the UK, Love Is All Around by Wet Wet Wet is the number one hit song. Bill Clinton is currently the President of the United States, and the movie Clear and Present Danger is at the top of the Box Office.

In Europe, a war is continuing to rage on in Bosnia and Herzegovina. Tributes are currently pouring in for English actor Peter Cushing, who has passed away from prostate cancer at the age of 81. Major League Baseball players have recently gone on strike following disagreements over a proposed salary cap.

In Ireland, gangland figure Martin Cahill (The General) has recently been assassinated outside of his home in Swan Grove, Ranelagh. If you were to travel back to this day, notable figures such as Raul Julia, Eazy E, Selena and Bob Ross would all be still alive. On TV, people are watching popular shows such as "Baywatch", "Mad About You", "Dr. Quinn, Medicine Woman" and "The X-Files".

Meanwhile, gamers are playing titles such as "Tiny Toon Adventures 2: Trouble in Wackyland", "Shinobi III: Return of the Ninja Master", "Jungle Strike" and "RoboCop Versus The Terminator". Children and teenagers are currently watching television shows such as "The Little Mermaid", "Hangin' with Mr. Cooper", "Tales from the Cryptkeeper" and "Boy Meets World". Popular toys at the moment include the likes of Yo-yo, the SEGA Game Gear, Pogs / Milkcaps and Teen Talk Barbie.

These are trending news stories and fads that were prevalent at this time. These are topics that would have been in the media on August 18th, 1994.

Check out our personality summary for people who were born on August 18th, 1994.

Television shows that people were watching in August, 1994.

Popular video games that people were playing in August of 1994.

If you are looking for some childhood nostalgia, then you should check out August 18th, 2000 instead.

Bill Clinton was the President of the United States on August 18th, 1994.

John Major was the Prime Minister of the United Kingdom on August 18th, 1994.

Enter your date of birth below to find out how old you were on August 18th, 1994.
This information is not transmitted to our server.