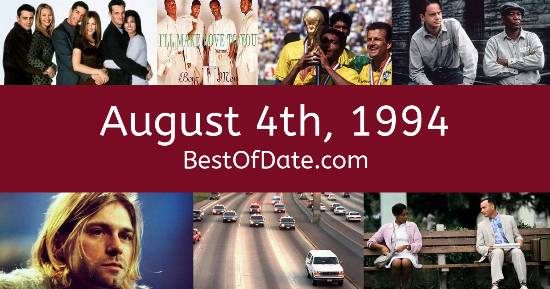 Songs that were on top of the music singles charts in the USA and the United Kingdom on August 4th, 1994.

The date is August 4th, 1994 and it's a Thursday. Anyone born today will have the star sign Leo. It's summer, so the temperatures are warmer and the evenings are longer than usual.

In America, the song I Swear by All-4-One is on top of the singles charts. Over in the UK, Love Is All Around by Wet Wet Wet is the number one hit song. Bill Clinton is currently the President of the United States and the movie The Mask is at the top of the Box Office.

It's 1994, so radio stations are being dominated by the likes of All-4-One, Boyz II Men, R. Kelly, Céline Dion, Bruce Springsteen, Bryan Adams, Meat Loaf, Bon Jovi, Wet Wet Wet, Rednex and Mariah Carey. In Europe, a war is continuing to rage on in Bosnia and Herzegovina. A new game called "Earthworm Jim" has recently been released for the Sega Genesis.

If you're a kid or a teenager, then you're probably playing with toys such as Sylvanian Families, Jenga, Yo-yo and Littlest Pet Shop.

If you are looking for some childhood nostalgia, then check out August 4th, 2000 instead.

Celebrities, historical figures and notable people who were born on the 4th of August.

Bill Clinton was the President of the United States on August 4th, 1994.

John Major was the Prime Minister of the United Kingdom on August 4th, 1994.

Enter your date of birth below to find out how old you were on August 4th, 1994.

Here are some fun statistics about August 4th, 1994.