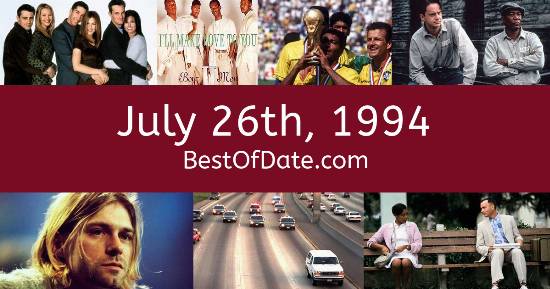 Songs that were on top of the music singles charts in the USA and the United Kingdom on July 26th, 1994:

The date is July 26th, 1994 and it's a Tuesday. Anyone born today will have the star sign Leo. It's summer, so the temperatures are warmer and the evenings are longer than usual.

In America, the song I Swear by All-4-One is on top of the singles charts. Over in the UK, Love Is All Around by Wet Wet Wet is the number one hit song. Bill Clinton is currently the President of the United States and the movie Forrest Gump is at the top of the Box Office.

In Europe, a war is continuing to rage on in Bosnia and Herzegovina. On TV, the final episode of the series "Dinosaurs" has been aired. In the United Kingdom, Tony Blair has become the new leader of the Labour Party after defeating John Prescott and Margaret Beckett in the recent leadership elections.

Celebrities, historical figures and noteable people who were born on the 26th of July:

Who was the Prime Minister of the United Kingdom on July 26th, 1994?

Looking for some nostalgia? Here are some Youtube videos relating to July 26th, 1994. Please note that videos are automatically selected by Youtube and that results may vary! Click on the "Load Next Video" button to view the next video in the search playlist. In many cases, you'll find episodes of old TV shows, documentaries, music videos and soap dramas.