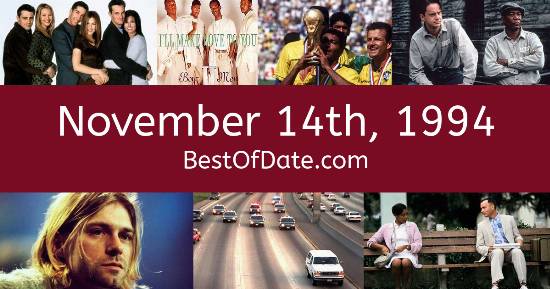 Songs that were on top of the music singles charts in the USA and the United Kingdom on November 14th, 1994:

The date is November 14th, 1994 and it's a Monday. Anyone born today will have the star sign Scorpio. It's November, so the evenings are getting darker and the days are getting colder.

In America, the song I'll Make Love To You by Boyz II Men is on top of the singles charts. Over in the UK, Baby Come Back by Pato Banton is the number one hit song. Bill Clinton is currently the President of the United States and the movie Interview with the Vampire is at the top of the Box Office.

In Europe, a war is continuing to rage on in Bosnia and Herzegovina. A new Christmas film called "The Santa Clause", starring Tim Allen, has just been released in movie theaters. Sweden has recently voted to become a part of the European Union.

Meanwhile, the Channel Tunnel between Britain and France has been officially opened to passenger cars. People are watching popular TV shows such as "Full House", "One Foot in the Grave", "Ellen" and "Party of Five". Meanwhile, gamers are playing titles such as "Shinobi III: Return of the Ninja Master", "Gunstar Heroes", "Disney's Aladdin" and "Donkey Kong Country".

Kids and teenagers are watching TV shows such as "The Adventures of Pete & Pete", "Doug", "Home Improvement" and "The Secret World of Alex Mack". If you're a kid or a teenager, then you're probably playing with toys such as "Jenga", "Yo-yo", "Littlest Pet Shop" and "Mighty Max".

Who was the Prime Minister of the United Kingdom on November 14th, 1994?

Enter your date of birth below to find out how old you were on November 14th, 1994.

Looking for some nostalgia? Here are some Youtube videos relating to November 14th, 1994. Please note that videos are automatically selected by Youtube and that results may vary! Click on the "Load Next Video" button to view the next video in the search playlist. In many cases, you'll find episodes of old TV shows, documentaries, music videos and soap dramas.

Here are some fun statistics about November 14th, 1994.