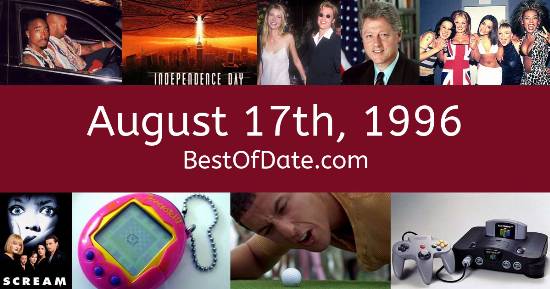 Songs that were on top of the music singles charts in the USA and the United Kingdom on August 17th, 1996.

The date is August 17th, 1996 and it's a Saturday. Anyone born today will have the star sign Leo. Currently, people are enjoying their weekend.

It's summer, so the temperatures are warmer and the evenings are longer than usual. In America, the song Macarena by Los Del Rio is on top of the singles charts. Over in the UK, Wannabe by Spice Girls is the number one hit song.

Bill Clinton is currently the President of the United States and the movie Tin Cup is at the top of the Box Office. In the United Kingdom, John Major is the current Prime Minister. A new form of communication called "text messaging" is continuing to grow in popularity. However, it can only be done if both the sender and the receiver are on the same cell network.

On TV, people are watching popular shows such as "Beavis and Butt-Head", "Lois & Clark: The New Adventures of Superman", "Touched by an Angel" and "Xena: Warrior Princess". Meanwhile, gamers are playing titles such as "Myst", "Mortal Kombat 3", "Air Combat" and "Twisted Metal". Kids and teenagers are watching TV shows such as "The Simpsons", "Animaniacs", "Weird Science" and "Brotherly Love".

Popular toys at the moment include the likes of Cabbage Patch Kids, Nerf Blaster, Action Man and Dear Diary.

If you are looking for some childhood nostalgia, then check out August 17th, 2002 instead.

Australian singer.
Born on August 17th, 2003
He was born exactly 7 years after this date.

Bill Clinton was the President of the United States on August 17th, 1996.

John Major was the Prime Minister of the United Kingdom on August 17th, 1996.

Enter your date of birth below to find out how old you were on August 17th, 1996.