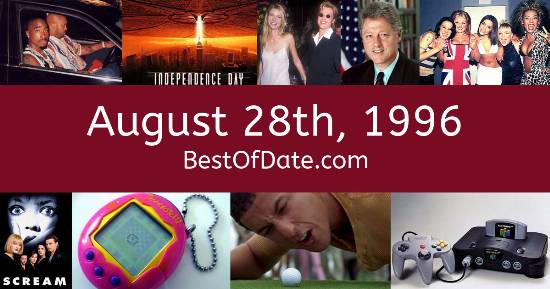 Songs that were on top of the music singles charts in the USA and the United Kingdom on August 28th, 1996.

The date is August 28th, 1996 and it's a Wednesday. Anyone born today will have the star sign Virgo. The summer of 1996 is coming to an end and fall is just around the corner.

In America, the song Macarena by Los Del Rio is on top of the singles charts. Over in the UK, Wannabe by Spice Girls is the number one hit song. Bill Clinton is currently the President of the United States and the movie Island of Dr. Moreau is at the top of the Box Office.

If you're a kid or a teenager, then you're probably playing with toys such as G.I. Joe (figures), Littlest Pet Shop, Mighty Max and 12" talking Buzz Lightyear Action Figure.

If you are looking for some childhood nostalgia, then check out August 28th, 2002 instead.

Bill Clinton was the President of the United States on August 28th, 1996.

John Major was the Prime Minister of the United Kingdom on August 28th, 1996.

Enter your date of birth below to find out how old you were on August 28th, 1996.