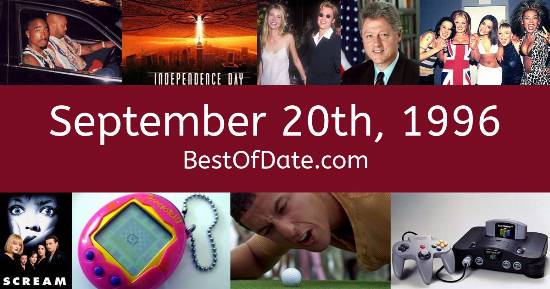 Songs that were on top of the music singles charts in the USA and the United Kingdom on September 20th, 1996:

The date is September 20th, 1996 and it's a Friday. Anyone born today will have the star sign Virgo. Currently, people have "that Friday feeling" and are looking forward to the weekend.

Schools have started back and autumn has arrived, so temperatures have started to cool and trees are beginning to shed their leaves. The earthy smells of fall have started to fill the air. In America, the song Macarena by Los Del Rio is on top of the singles charts.

Over in the UK, Ready Or Not by Fugees is the number one hit song. Bill Clinton is currently the President of the United States and the movie Maximum Risk is at the top of the Box Office. In the United Kingdom, John Major is the current Prime Minister.

In fashion, "grunge" clothing has declined in popularity and women are beginning to wear form-fitting outfits such as slip dresses and pencil skirts. Movies such as Clueless and The Craft have popularized the "sexy school girl" look. It's 1996, so radio stations are being dominated by the likes of Mariah Carey, Boyz II Men, Céline Dion, Oasis, Mark Morrison, Spice Girls, Los Del Rio, 2Pac and Coolio. Everyone and their grandmother is buying a new "virtual pet" called the Tamagotchi.

The world is in shock following the recent murder of rap star Tupac Shakur. On TV, people are watching popular shows such as "Hangin' with Mr. Cooper", "Boy Meets World", "Babylon 5" and "Gargoyles". Meanwhile, gamers are playing titles such as "Quake", "Die Hard Trilogy", "Crash Bandicoot" and "The Elder Scrolls II: Daggerfall".

Kids and teenagers are watching TV shows such as "The Magic School Bus", "Gargoyles", "Aaahh!!! Real Monsters" and "Dexter's Laboratory". If you're a kid or a teenager, then you're probably playing with toys such as "G.I. Joe (figures)", "Super Soaker (water gun)", "Nerf Blaster" and "Tamagotchi".

Who was the Prime Minister of the United Kingdom on September 20th, 1996?

Enter your date of birth below to find out how old you were on September 20th, 1996.

Looking for some nostalgia? Here are some Youtube videos relating to September 20th, 1996. Please note that videos are automatically selected by Youtube and that results may vary! Click on the "Load Next Video" button to view the next video in the search playlist. In many cases, you'll find episodes of old TV shows, documentaries, music videos and soap dramas.

Here are some fun statistics about September 20th, 1996.