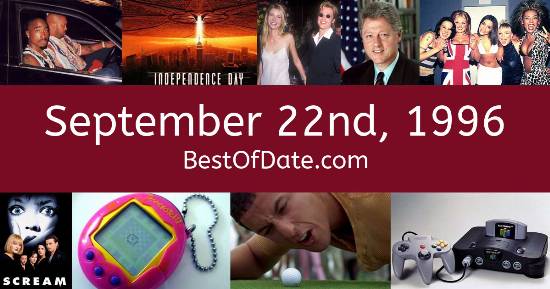 These songs were on top of the music charts in the United States and the United Kingdom on September 22nd, 1996.

The top "Box Office" movie on this date was the film "Maximum Risk".

The date is September 22nd, 1996, and it's a Sunday. Anyone born today will have the star sign Virgo. Currently, people are enjoying their weekend.

Schools and colleges are starting again and Autumn has officially arrived. As a result, temperatures are beginning to cool and trees are starting to shed their leaves. The earthy smells of fall have started to fill the air. In America, the song Macarena by Los Del Rio is on top of the singles charts.

Over in the UK, Ready Or Not by Fugees is the number one hit song. Bill Clinton is currently the President of the United States, and the movie Maximum Risk is at the top of the Box Office. In the United Kingdom, John Major is the current Prime Minister.

Meanwhile, CDs have become the dominant format for music. People are buying CD players and portable CD players such as the "Discman". As a result, the older cassette tape format is continuing to decline in sales. It's 1996, so radio stations are being dominated by the likes of Mariah Carey, Boyz II Men, Céline Dion, Oasis, Mark Morrison, Spice Girls, Los Del Rio, 2Pac and Coolio. Everyone and their grandmother is buying a new "virtual pet" called the Tamagotchi.

A new dance craze called the "Macarena" is all the rage at the moment. The world is in shock following the recent murder of rap star Tupac Shakur. In England, Arsene Wenger has just been unveiled as the new manager of Arsenal.

If you were to travel back to this day, notable figures such as Yaki Kadafi, Tiny Tim, Carl Sagan and JonBenét Ramsey would all be still alive. On TV, people are watching popular shows such as "Married... with Children", "The X-Files", "The Nanny" and "Star Trek: Voyager". Meanwhile, gamers are playing titles such as "Super Mario World 2: Yoshi's Island", "Twisted Metal", "Ridge Racer Revolution" and "Quake".

Kids and teenagers are watching TV shows such as "Doug", "Weird Science", "Brotherly Love" and "Moesha". Popular toys at the moment include the likes of G.I. Joe (figures), Sky Dancers, Styrofoam plane gliders and the PlayStation (PS1).

These are trending news stories and fads that were prevalent at this time. These are topics that would have been in the media on September 22nd, 1996.

Check out our personality summary for people who were born on September 22nd, 1996.

Television shows that people were watching in September, 1996.

Popular video games that people were playing in September of 1996.

If you are looking for some childhood nostalgia, then you should check out September 22nd, 2002 instead.

Bill Clinton was the President of the United States on September 22nd, 1996.

John Major was the Prime Minister of the United Kingdom on September 22nd, 1996.

Enter your date of birth below to find out how old you were on September 22nd, 1996.
This information is not transmitted to our server.

Here are some fun statistics about September 22nd, 1996.