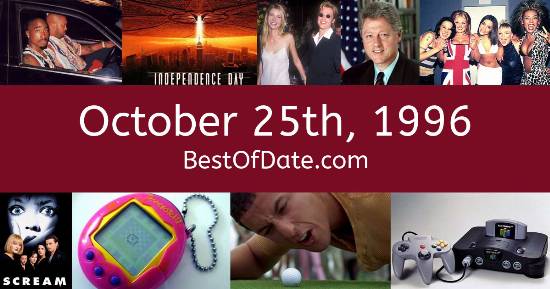 Songs that were on top of the music singles charts in the USA and the United Kingdom on October 25th, 1996.

The date is October 25th, 1996 and it's a Friday. Anyone born today will have the star sign Scorpio. Currently, people have "that Friday feeling" and are looking forward to the weekend.

The summer is long gone. Temperatures have started to become much cooler and the evenings are beginning to get darker. Fallen leaves have carpeted driveways, lawns, pathways and sidewalks and there's a fresh earthy scent in the ear. Halloween of 1996 is quickly approaching and stores are selling costumes and decorations.

In America, the song Macarena by Los Del Rio is on top of the singles charts. Over in the UK, Say You'll Be There by Spice Girls is the number one hit song. Bill Clinton is currently the President of the United States and the movie Sleepers is at the top of the Box Office.

On TV, people are watching popular shows such as "Mad About You", "Babylon 5", "Pinky and the Brain" and "Sabrina, the Teenage Witch". Meanwhile, gamers are playing titles such as "Destruction Derby", "Duke Nukem 3D", "Resident Evil" and "Fade to Black". Kids and teenagers are watching TV shows such as "Living Single", "Animaniacs", "Moesha" and "Mortal Kombat: Defenders of the Realm".

If you're a kid or a teenager, then you're probably playing with toys such as Polly Pocket, Lego Pirates, Yo-yo and Super Soaker (water gun).

If you are looking for some childhood nostalgia, then check out October 25th, 2002 instead.

Bill Clinton was the President of the United States on October 25th, 1996.

John Major was the Prime Minister of the United Kingdom on October 25th, 1996.

Enter your date of birth below to find out how old you were on October 25th, 1996.

Here are some fun statistics about October 25th, 1996.