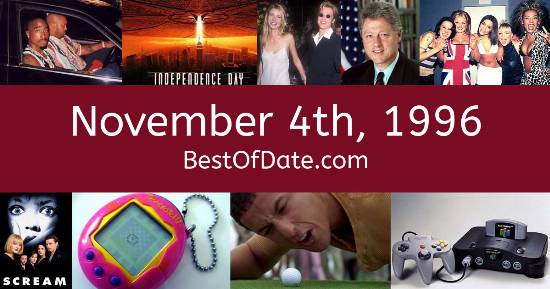 Songs that were on top of the music singles charts in the USA and the United Kingdom on November 4th, 1996:

The date is November 4th, 1996 and it's a Monday. Anyone born today will have the star sign Scorpio. It's November, so the evenings are getting darker and the days are getting colder.

A new video game console called the "Nintendo 64" has just been released. It is currently competing against the Sony PlayStation and the Sega Saturn. People are watching popular TV shows such as "Last of the Summer Wine", "Rugrats", "Walker, Texas Ranger" and "ER". Meanwhile, gamers are playing titles such as "Air Combat", "Destruction Derby", "Phantasmagoria" and "Wipeout 2097".

Kids and teenagers are watching TV shows such as "All That", "Gargoyles", "Hang Time" and "Mortal Kombat: Defenders of the Realm". Popular toys include the likes of "Super Soaker (water gun)", "Nerf Blaster", "Littlest Pet Shop" and "Tickle Me Elmo".

Who was the Prime Minister of the United Kingdom on November 4th, 1996?

Enter your date of birth below to find out how old you were on November 4th, 1996.

Looking for some nostalgia? Here are some Youtube videos relating to November 4th, 1996. Please note that videos are automatically selected by Youtube and that results may vary! Click on the "Load Next Video" button to view the next video in the search playlist. In many cases, you'll find episodes of old TV shows, documentaries, music videos and soap dramas.

Here are some fun statistics about November 4th, 1996.