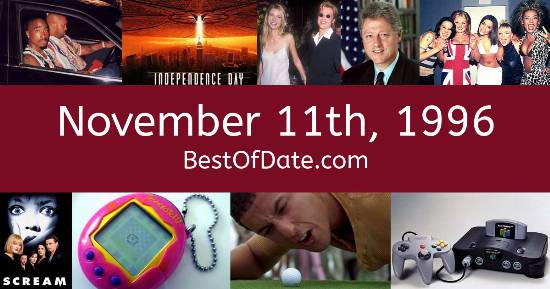 Songs that were on top of the music singles charts in the USA and the United Kingdom on November 11th, 1996:

The date is November 11th, 1996 and it's a Monday. Anyone born today will have the star sign Scorpio. It's November, so the evenings are getting darker and the days are getting colder.

In America, the song No Diggity by Blackstreet is on top of the singles charts. Over in the UK, What Becomes Of The Broken Hearted by Robson & Jerome is the number one hit song. Bill Clinton is currently the President of the United States and the movie Ransom is at the top of the Box Office.

A new video game console called the "Nintendo 64" has just been released. It is currently competing against the Sony PlayStation and the Sega Saturn. On TV, people are watching popular shows such as "Roseanne", "Hangin' with Mr. Cooper", "Dr. Quinn, Medicine Woman" and "The Nanny". Meanwhile, gamers are playing titles such as "Die Hard Trilogy", "The Elder Scrolls II: Daggerfall", "Super Mario 64" and "Wipeout 2097".

Celebrities, historical figures and noteable people who were born on the 11th of November:

National holidays and famous events that fall on the 11th of November:

Who was the Prime Minister of the United Kingdom on November 11th, 1996?

Enter your date of birth below to find out how old you were on November 11th, 1996.

Looking for some nostalgia? Here are some Youtube videos relating to November 11th, 1996. Please note that videos are automatically selected by Youtube and that results may vary! Click on the "Load Next Video" button to view the next video in the search playlist. In many cases, you'll find episodes of old TV shows, documentaries, music videos and soap dramas.

Here are some fun statistics about November 11th, 1996.