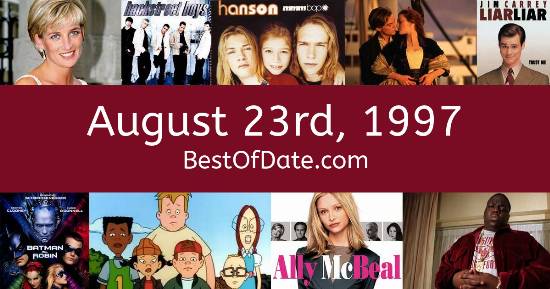 On August 23rd, 1997, the following songs were at the top of the music charts in the USA and the UK.

The top "Box Office" movie on this date was the film "Cop Land".

The date is August 23rd, 1997, and it's a Saturday. Anyone born today will have the star sign Virgo. Currently, people are enjoying their weekend.

The summer of 1997 is coming to an end and fall is just around the corner. In America, the song I'll Be Missing You by Puff Daddy & Faith Evans is on top of the singles charts. Over in the UK, Men In Black by Will Smith is the number one hit song.

Bill Clinton is currently the President of the United States, and the movie Cop Land is at the top of the Box Office. In the United Kingdom, Tony Blair is the current Prime Minister. A new form of communication called "text messaging" is continuing to grow in popularity. However, it can only be done if both the sender and the receiver are on the same cell network.

It's 1997, so radio stations are being dominated by the likes of Toni Braxton, the Spice Girls, Puff Daddy, No Doubt, Hanson and Elton John. If you were to travel back to this day, notable figures such as Princess Diana, Mother Teresa, John Denver and Chris Farley would all be still alive. On TV, people are watching popular shows such as "Baywatch", "Mad About You", "Party of Five" and "Hercules: The Legendary Journeys".

Meanwhile, gamers are playing titles such as "Virtua Fighter 2", "Crash Bandicoot", "Castlevania: Symphony of the Night" and "Star Fox 64". Children and teenagers are currently watching television shows such as "Rugrats", "Animaniacs", "Sister, Sister" and "Goosebumps". If you're a kid or a teenager, then you're probably playing with toys such as Yo-yo, Fisher-Price Great Adventures Castle, the Tamagotchi and the Nintendo 64.

These are trending news stories and fads that were prevalent at this time. These are topics that would have been in the media on August 23rd, 1997.

News stories, pop culture trends, and other events that happened around August 23rd, 1997.

Check out our personality summary for people who were born on August 23rd, 1997.

Television shows that people were watching in August, 1997.

Popular video games that people were playing in August of 1997.

If you are looking for some childhood nostalgia, then you should check out August 23rd, 2003, instead.

Celebrities, historical figures, and other notable people who were born on August 23rd.

Bill Clinton was the President of the United States on August 23rd, 1997.

Find out what your age was on August 23rd, 1997, by entering your DOB below.
This information is not saved on our server.