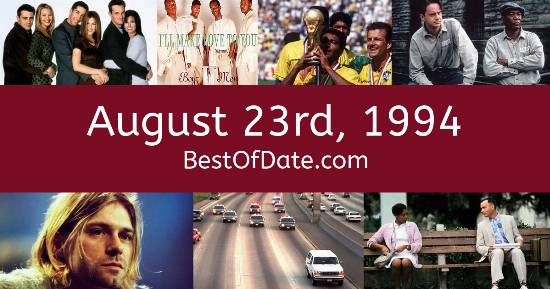 Songs that were on top of the music singles charts in the USA and the United Kingdom on August 23rd, 1994.

The date is August 23rd, 1994 and it's a Tuesday. Anyone born today will have the star sign Virgo. The summer of 1994 is coming to an end and fall is just around the corner.

In Europe, a war is continuing to rage on in Bosnia and Herzegovina. In Ireland, gangland figure Martin Cahill (The General) has recently been assassinated outside of his home in Swan Grove, Ranelagh. If you were to travel back to this day, notable figures such as Raul Julia, Eazy E, Selena and Bob Ross would all be still alive.

On TV, people are watching popular shows such as "Married... with Children", "Step by Step", "Mad About You" and "Dr. Quinn, Medicine Woman". Meanwhile, gamers are playing titles such as "X-Men", "Gunstar Heroes", "Myst" and "Super Street Fighter II". Kids and teenagers are watching TV shows such as "The Simpsons", "Home Improvement", "Living Single" and "Biker Mice from Mars".

If you're a kid or a teenager, then you're probably playing with toys such as Lego Pirates, Super Soaker (water gun), Pogs / Milkcaps and Power Rangers figures.

If you are looking for some childhood nostalgia, then check out August 23rd, 2000 instead.

Bill Clinton was the President of the United States on August 23rd, 1994.

John Major was the Prime Minister of the United Kingdom on August 23rd, 1994.

Enter your date of birth below to find out how old you were on August 23rd, 1994.